The first chapter of a manga comic series on Apple Co-founder Steve Jobs has surfaced online, giving readers a glimpse into the story written by Mari Yamazaki. The series is based on the biography of Steve Jobs written by Walter Isaacson.

The first chapter of Steve Jobs manga begins in 2004, where Steve Jobs travels to Colorado to meet with author Walter Isaacson, Jobs puts in a request to Isaacson to see if he is interested in writing a biography. The idea is put on hold until Isaacson receives a call from Jobs wife Laurene saying that Steve Jobs has cancer.

The first chapter can be found in today’s issue of Kiss magazine, and publisher Kodansha released a couple of images online.

Yamazaki has won awards for other manga series including, Thermae Romae, which is published by Yen Press in North America. 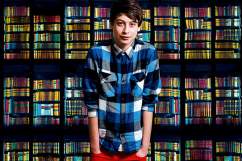