Google Glass has been getting a lot of hype over the last year, and you probably want to know when you can get your hands on a pair of Google Glasses? In an interview with BBC Radio, Eric Schmidt made it clear that Google Glass is still “a year-ish away.”

“Well, the developers are beginning now. It would be fair to say that there will be thousands of these in use by developers over the next months. And then based on their feedback, we’ll make some product changes – and it’s probably a year-ish away.”

As much as we’d like to see and buy a pair of Google Glass, developer “Explorer Edition” are currently running at the cost of $1,500.

The new eye gesture would make it easier to capture images while on-the-go. Users could blink an eye to take a photo with its 5-megapixel camera, rather than saying, “Glass, take a picture.” The app also showed code for being able to enable and disable eye gestures, meaning this feature is optional for Glass wearers.

Hopefully we’ll learn more about new head gestures and how to buy Google Glass at I/O 2014. 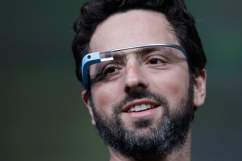