After attempting to launch its cab app without permission last summer, New York City’s Taxi and Limousine Commission (TLC) banned the service. However, after completing a trial to test taxi-hailing apps, Uber has been approved and is allowed back on the road. A one-year pilot program of the app started on Friday and New Yorkers can now stop waving their hands to catch a ride. At the press of a button on any smartphone, users can pinpoint an exact location for an Uber cab to pick them up.

David Yassky, commissioner of the Taxi and Limousine (TLC), said he is excited for the new system of cab-hailing to go into effect.

“There are several other companies in various stages of our approval process with others sure to join them, and we are excited about the prospect of seeing the universe of choices expand,” Yassky said in a statement.

“We couldn’t be happier to be the first and only e-hail app that has approval to operate in New York City,” Kalanick said. “UberTAXI will be lighting up yellow cabs across New York City momentarily.” 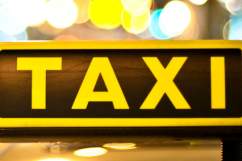