According to a leading computer security firm, Syria has disappeared from the Internet again. Here’s what you need to know.

If you or anyone you know can give us more information on the Syrian Internet blackout, please comment below or email me at ian@heavy.com.

1. Syria has Vanished From The Internet

According to Umbrella Security Labs, significant drops in traffic indicates that Syria has essentially “disappeared” from the Internet.

2. Syria Disappeared from the Internet in 2012 Too

According to CNN, this has happened before. The Internet in Syria was shut off for two days in late 2012. Here’s what CNN said:

Despite claims to the contrary, the Syrian government is almost certainly responsible for a blackout Thursday that shut down virtually all Internet service in the country, according to a leading Web security firm.”The Syrian Minister of Information is being reported as saying that the government did not disable the Internet, but instead the outage was caused by a cable being cut,” writes Matthew Prince, CEO of CloudFlare. “From our investigation, that appears unlikely to be the case.”

Syria already heavily censors the Internet. According to a report published by the OpenNet Initiative, the Syrian government filters and blocks website and Internet services based on politics and selectively in areas of social and political unrest.

4. This Happened Right After Some Major News About Syria Came Out

As the Syrian government was taken offline, reports came out that said US Secretary of State John Kerry, the Obama administration, and Russia were discussing the possibility of breaking up the country of Syria to prevent further civil unrest. Here’s what we wrote earlier:

Now U.S. Secretary of State, John Kerry says alternative to a negotiated political solution on Syria is a possible break up of the country.Muhammed A. Yildrim, a post-doctoral fellow in Harvard’s Center for International Development, told Heavy.com that division of the country is “a viable solution as there is a minority that are concentrated in the western side of Syria.” 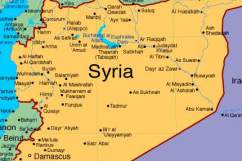 5. Google Services are Down in Syria Too