The aforementioned Reddit post is titled “Discovered that everyone thinks a fake Xbox Infinity logo I made in Photoshop is the real deal.” The logo was cited by IBTimes UK, who said that it was “proof” that the next-gen Xbox 720 would be called the “Xbox Infinity.”

But, but we spoke to Cameron Holtzbach (follow his Twitter here), the guy who created the fake Xbox Infinity logo. Here’s how the conversation went:

Me: So…Xbox Infinity…did you make it up as a concept?

Cameron: I’ve been doing a lot of Photoshop teasers for a while. Most of the time they would be obvious like fake (upcoming) Apple products. I decided I would make something for what I thought the next Xbox would be like. I put it on Reddit expecting people to be confused, curious, etc. Not a lot happened with that after a few days. I forgot about it until I checked Twitter and I started seeing “Xbox Infinity” with my logo everywhere….and then I did a Google image search for it, and my logo was everywhere, too.

Me: Also – do you know what the new Xbox will be called? Or were you just guessing?

Cameron: I mean, to be honest, if you have a little bit of common sense in terms of how console manufacturers like to market, specifically how Microsoft does things, the “Infinity” branding is kind of easy to guess. I have no knowledge about any upcoming game consoles at all. I guess I’m just in tune to how the business side of the game industry works, so I can make little guesses/predictions. I don’t have any inside knowledge at all. And yeah! I saw some of the more official articles like the ones from IGN (even their VIDEO!), GameSpot, C|Net, Ars Technica, and I couldn’t help but chuckle. I thought these guys were supposed to be reputable! 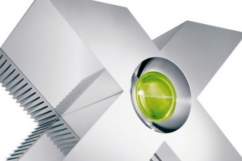 Personally, the Xbox Infinity article we heard earlier today looked a little sketchy. IBTimes UK cited “unnamed sources” who “confirmed” that the new Xbox device would be called the Xbox Infinity. With the rumored unveiling only weeks away (May 21st, according to reports), it made sense that information would be leaking about the Xbox 720…or whatever it’s called.

But, the issue is: Why would Microsoft switch up the nomenclature so randomly? Yes, Apple pulled a similar stunt by calling the iPad 3, which was released in 2012, “The iPad.” However, they rectified the issue when they named the newest iPad — released alongside the iPad Mini in October 2012 — the iPad 4. After the “Xbox” and the “Xbox 360,” why would Microsoft change the name so abruptly? It didn’t make sense to us.