Here are five fast facts you need to know.

On June 14th, Google’s blog revealed the new project known as Project Loon. It’s purpose is to provide free internet access to people all over the world especially in remote areas.

By floating higher than traditional airplanes, the balloons are moved by the winds but can be steered in a desired direction. The site states that connections would be available from antennae attached to where people live.

The invention is meant to also serve a variety of other tasks which include helping people get back online quickly after a disaster and aid in filling in coverage gaps.

According to The Independent, the first test flight took place over the southern island of New Zealand.

Powered by dangling solar power panels, the balloon was launched with antennas, computers, batteries, etc. Results have yet to be posted, but the website indicates that a group of test pilots will report back on the results with a festival of flight taking place. An estimated total of 30 of the balloons were launched.

4. Google X Is The Brains Behind This

This division of the search giant is responsible for inventing its recent controversial items. Along with Google’s driverless car, the lab is focuses on making futuristic products possible.

For awhile, this was a rumored project and manyTechcrunch felt that this was a long shot.

5. Search For The Results Tomorrow

Google X deserves credit since this is a bold move. While the test flight only has just happened, the company’s website giving all the information about the project is important as a selling point. However, they need to present a clear report on issues this may encounter.

These “remote areas” they keep referring to can be seriously affected by weather conditions and some parts of the country may not have a great infrastructure to support these new antennas. This could completely change the role the internet has in society but these results tomorrow are very important. 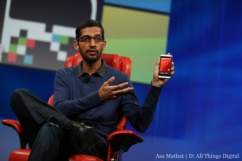 HTC One Google Edition: 5 Fast Facts You Need to Know