One of the new products expected to premiere at WWDC 2013 was Apple’s new operating system iOS 7. Leaking several hours before the conference keynote begins, images of the possible beta have surfaced online. Here is what you need to know.

1.It Has A Flat Look


Last night, 9to5Mac’s Seth Weintraub reported that he got an early peek at the latest version of the company’s operating software. While not being allowed to post actual pictures due to legal issues, Weintraub confirmed the biggest rumor; that it would have a flat design. The blog posted a mockup detailing what the new icons would look like which indicated compressed buttons with no dimension. Big shifts in icon looks included iTunes as a purple shade, the camera icon is a developed camera and the photo button is now a rotating color wheel. Weintraub elaborated that these may change but still was interesting look at the software.

2.A New Color Scheme Is Offered


The blog post also discussed a new color scheme the system will offer. Another development that was announced by the company a few weeks ago, Weintraub said that there were two black and white color schemes with the white being similar to the look of the Android. He wasn’t sure if this would be offered for black iPhones and white iPhones but felt it was a good addition to the new UI Jony Ive was working on. The color schemes claiming that it may shift based on ambient light. MacRumors has been another source supporting rumors like this but Weintraub was still unsure if these were just A/B decoys since we still have some time before the keynote.

3.The Home Screen Has Subtle Differences


Once a new iPhone is turned on, the new iOS will possibly have subtle differences for the home screen. Carrier Bars indicating signal strength for WiFi and cell service will be replaced by a series of white or gray dots. The sparse type will be the Helvetica font seen on the posters advertising the software for the new conference. All of these features emphasize the simplistic color scheme but the differentiations like this has to be a main discussion point during the conference.

4.iOS 7 Will Have AirDrop And Walking Directions


Weintraub said the maps function may have new walking directions added but couldn’t elaborate. Supporting the rumor of Airdrop being added into the new version of iOS, Weintraub discussed a new sharing function. Apparently, a scrolling sideways menu is on the system which allows easier sharing of photos and social media capabilities. This can happen regardless of internet connection so this already has an advantage over its predecessor.

5.Why Apple Needs To Impress With iOS 7


The new designs rumored to be part of the tech giant’s operating software is supposed to be revolutionary.These iOS 7 details may be confirmed or Tim Cook could present us with a completely different design than the one Weintraub reports on.With the keynote set to begin in a few hours, Apple needs to make us believe that. This is the crucial part of all of their new tablets and phones. They have to prevent any possible criticism so essentially explaining every single aspect of iOS 7 in depth will be the key. It hasn’t been easy for Apple but the conference is the best place to continue to prove why they are the leaders in innovation. We’ll update this more once details become clear but keep checking back for more news on WWDC 2013. 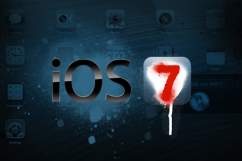