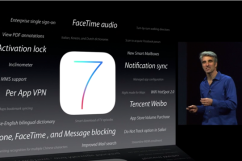 iOS 7 was officially announced at WWDC 2013 this past week, to a lot of fanfare. Heavy.com reviewed iOS 7 and we loved it, even though the beta version that was released is still a little buggy (but those are kinks that should be worked out by the time Apple releases the full version of iOS 7). But when can we actually see the final version of iOS 7? Here’s what you need to know

1. Apple said to Expect iOS 7 in the Fall

During WWDC 2013, when Apple was announcing the new operating system, all anyone could think was “When can I have it?” Well, while Apple did give an answer, it certainly wasn’t a definitive one. Apple execs at the conference said that you can expect iOS 7 “sometime this fall.” The statement coincides with last years WWDC, where Apple showed off iOS 6 (fun fact: At the time, everyone thought Apple Maps looked great! How wrong they were…) but said that it would only be available for developers until the public release “later this fall.”

How to Download iOS 7 on Your iPhone 5, iPhone 4S, or Other iOS Device

2. The Fall is When the iPhone 5S is Expected

Going back to iOS 6 and WWDC 2012, iOS 6 was officially released in September 2012, alongside the iPhone 5. When Apple announced that iOS 6 would be available in the fall, many hypothesized that Fall 2012 could be potential release date for the iPhone 5, and it turns out they were right. We can expect a similar schedule for the iPhone 5S as well. Rumors are already circulating that Apple is prepping for a major product release soon. Reuters writes that the iPhone 5S, with fingerprint technology, will be coming in September, citing sources within Apple’s supply chain.

The Next Web reports that a lot of iOS 7 was developed by separate teams. According to them SVP Jony Ive, who basically oversaw all the major user interface changes in iOS 7, separated the teams that would redesign the stock apps pre-installed into iOS 7 and basically gave them a color pallate to use as a template. Furthermore, The Next Web writes that the developers working between apps — say Stocks and Mail — didn’t communicate much, which explains why all the apps looks so incredibly different. Yes, iOS 7 looks great, but there are some small issues, like the icons for certain apps, the changes made inside the apps, etc., that don’t really make sense. It feels like they were made by separate teams — which is weird because Apple loves conformity — and apparently they were.

4. Downloading iOS 7 Beta May be Harmful to Your iDevice

You should be careful about downloading the unstable beta version of iOS 7, which became available on Monday for developers. There are a lot of issues that could potentially occur, which are outlined in this post. One of the biggest issues is that potentially, iOS 7 could brick your iPhone. While we haven’t heard about anything about anyone bricking their phone (I was pretty close this morning, but managed to salvage it), Apple doesn’t have to claim responsibility for a bricked iPhone. They already notified you in the release notes (that you probably didn’t realy, lets be honest) that iOS 7 was a beta program. So, be careful about download an early copy of iOS 7 (especially if you’re going to torrent it). You never know what you’ll get.

5. The Final Version of iOS 7 May Look Different

The Next Web also noted that the developers at Apple are still hard at work, coding away at their desk. iOS 7 development isn’t finished by a long shot. The Next Web even said a few of the slides and images shown at WWDC 2013 were from iOS 7 builds that are newer than the one that was released on Monday. So, this means that Apple still could make significant changes to iOS 7 by the time it’s officially released “sometime in the Fall.” That means that the icons could be changing as well. Gizmodo notes astutely that it would be in Apple’s best interest to change the look of the icons in iOS 7. The home screen is probably one of the first thing future iOS 7 users will see, and when their eyes lock onto a screen with brightly colored icons, they could be turned off — no matter how fantastic the other changes to iOS 7 are.

Read More
Apple, iOS 7, iPhone 5S, WWDC 2013
iOS 7 was announced at WWDC 2013, by Apple hasn't released the mobile operating system for the public yet. Most say that iOS 7 should be available with the iPhone 5S in the Fall.