Apple has applied for new trademarks on a smart-watch strengthening rumors from earlier this year. Here are five fast facts you need to know.

1.The Patent Was Filed in Japan

Bloomberg reports that Apple is seeking a trademark for the name of its smart-watch in Japan. They want protection for the name in order to have it categorized as a handheld or wearable computer device. According to this same report, this information was made public by a file given to the Japan Patent Office on June 3rd which occurred almost a week before the company held their annual developers conference.

2.Other Tech Firms May Want The “iWatch” Name

Apple may have done this as a preventative measure since other firms are apparently seeking ownership of this title. Engadget states that several other companies have been sent applications for the name “iWatch” based on information given by the tech sites Japanese editors. However, this particular patent came straight from the tech innovators HQ in Cupertino, California. They report that this recent filing is similar to an earlier one in terms of features. The product will allegedly include a kinetic energy charger and end-user detection sensor.

Rumors of this newest innovation from Apple began earlier this year. In February, AppleInsider discovered that Tim Cook’s company had filed a patent for a flexible touchscreen display. The site explained that the patent was filed in August 2011 with similar features that the recent application explains. Also, the emphasis on design has now been confirmed since it was reported that the company had about 100 designers beginning to work on this product.

Computers that you can wear is reaching a pinnacle of popularity thanks Google’s latest innovation. Google Glass made an impression when it premiered at the search engine’s developer conference. For now, they are the only firm who created this product but others have concocted similar watch ideas. Sony has already distributed its own smart-watch into the market. One of the possible reasons as to why Apple sent out a new patent in order to compete with Samsung. The other smart phone maker apparently has intentions to develop their own version of this wearable tech and could be one of the firms who have been campaigning for this famous name.

5.Apple Needs To Catch Up

We still need more information on the watch but this a positive sign. Patents have a long process before they are finalized. Although CEO Tim Cook made it clear he was interested in exploring this field, he has indicated that there may be problems associated with wearable tech. Apple has not released a revolutionary product since October 2012 but iOS 7 and the newest generation of phones emphasizes the importance of a new invention. In order to stand out among the crowd of tech organizations, Tim Cook and his crew need to ensure that the “iWatch” will live up to the impressive presentation for iOS 7. Ultimately, it looks like Apple will need this watch more than consumers will. 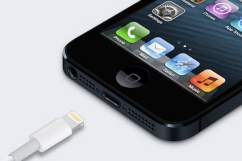 Where Can You Get The Cheapest iPhone Cords?