Yves Saint Laurent CEO Paul Deneve has been hired at Apple. Here are five fast facts you need to know.

1. He Is VP Of Special Projects

That’s all we know about the new title. The exec will be reporting directly to Tim Cook. Earlier this week, rumors surfaced that Deneve will take over as head of retail. Nothing confirmed about that piece of information but the “iWatch” project is a likely candidate. Paul’s fashion experience would help him create something suave and stylish for this product.

The fashion exec is leaving behind a great career at YSL. The 53 year old belgian has doubled revenue at the famous fashion house and has brought in controversial designers to completely revamp the design shop’s style. His expertise focused on luxury brands since he also led the boards on other clothing lines. Certain aspects of his reign at YSL have been criticized such as restrictions on press coverage.

3. He Has Worked At Apple Before

Deneve has always been a part of Silicon Valley despite his luxury experience. Between 1990 and 1997, the exec worked in the sales and marketing sectors of Apple. These roles were stationed in the European branch of the company before progressing over into luxury goods. Paul also has served as a part-time advisor for several silicon valley firms keeping close ties to the tech industry. It is hard to tell if this hire was a personal preference for Tim Cook.

The company made another new hire to help their TV efforts by hiring former Hulu exec Peter Distadt. While this a positive sign, Apple still has a gaping hole in the retail sector. Paul ultimately could end up becoming the new head of retail but his experience could be better on the luxury side. If they found a good head of retail, this would greatly support the watches development.

This wearable tech is going to be the next big thing from Apple. Tim Cook has admitted he is interested in exploring this area too. Google is already ahead with their new invention so the infusion Paul’s fashion expertise could help with production. Expect more rumors to come back for this. Apple has so much on its plate already but this would be a nice addition. The inclusion of iOS 7 could make this a really powerful watch but more research should be done first. All Apple fans should keep an eye on this information. 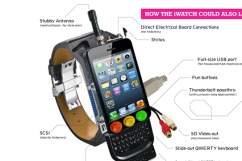