No one’s privacy is safe in the new digital age thanks to Wikileaks founder Julian Assange. The recently released trailer for The Fifth Estate illustrates how Assange and his organization played a role in this new revolution.

Starring Star Trek: Into Darkness star Benedict Cumberbatch as the polarizing figure and directed by Bill Condon, this true-life thriller chronicles the early clashes between the most powerful government in the world and a collection of information radicals.

While Cumberbatch is the only “recognizable” face in the film, this is the second movie this year focusing on Assange. The previous movie was a documentary done by legendary filmmaker Alex Gibney. The common thread between these two though is that Assange has disavowed both pictures. From the looks of the trailer, it doesn’t seem as if it will tilt to the left or right politically. Expect to see Benedicts legion of “cumberbitches” turn out in droves for this movie. 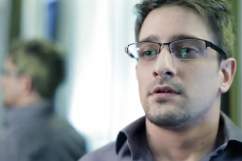