The Google Nexus 4 unlocked smartphone price has been lowered again after the company tweeted a new deal last night. A 16GB Nexus 4 can be bought for $249 and an 8GB model is now $199 in most international territories.

The Nexus 4 gained an update to run on Android 4.3. (Phandroid)

The Nexus 4 has been on the market for nine months but the continuous price drop is unusual. It made a good impression when it arrived mostly because of the low price and strong build, but there could be a good reason for this.

It’s no secret Apple will be launching a cheaper iPhone this fall, so Google may have slashed the price to compete with this new invention. The Nexus 4 is rated well and could be a serious contender against the iPhone 5C. Google and LG may be paving the way for the rumored Nexus 5. 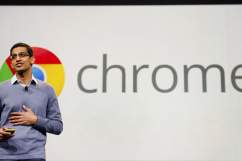 Adopting Apple’s dual-pronged smartphone strategy for the fall could be sensible if Google and LG want to knock Apple off its high horse. Selling this unlocked phone at a lower cost in major markets means that Google could obtain a large share of the smartphone market.

You can order the low cost Google Nexus 4 here.