Opting to avoid a livestream, Motorola Mobility announced the arrival of the Moto X today.

The smartphone is the first gadget developed under the Google and Motorola Mobility partnership. The device will cost either $199 for 16GB or $249 with a 32GB. All major U.S. cell carriers will support the gadget while the release date is expected to be late August/early September.

For the specs, Moto X is capable of 24 hour battery life of “mixed use”. This entails phone calls, touch-less controls such as hands-free voice capabilities as well as a mix of video watching and browsing. The phone operates under Jelly Bean OS (Android 4.2.2) just like the Samsung Galaxy S4. Moto X has a 4.7 inch AMOLED display running at 720p with 316 pixels per inch. The camera, 10 megapixels with an LED flash, contains a quick capture mode. By twisting your wrist twice, the lens activates and takes a picture even when the app is turned off.

The customization options will be a big selling point. Black and white are the only colors but Motorola will launch “MotoMaker” to let customers choose their own designs. The color palette has 18 selections but a “wood” design may become the most popular.

Yep. We've got wood. And 2K+ other combos. Designed by you. Assembled in the USA. #MeetMotoX http://t.co/by2VQrBAfP pic.twitter.com/LolHDlUagc 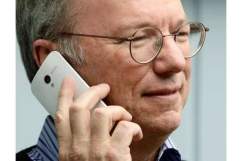 The Motorola X May Come As Soon As August