Earlier today, Tim Cook and his team announced the next series of iPhones as well as the refurbished version of iOS 7. They have made the keynote available for viewing on their website but unfortunately we can’t post a direct link. The video can be viewed on either Google Chrome and Safari for free. You can watch it here.

The iPhone 5S will be the flagship phone for a new generation. Notable new features include a champagne colored case, an A7 processor and TouchID fingerprint sensor to round out a appealing package. Its counterpart, the iPhone 5C, will be a budget iPhone coming in two distinct versions. One will be priced at $99 for 16GB while the other will be $199 for 32GB giving consumers an excellent entry point into become an Apple fanatic. iOS 7 rounds of the rest of the package with alterations to Siri’s voice and search functions, improved graphics and much more. 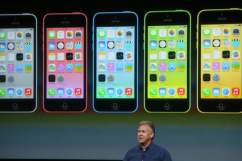 Both iPhones will be released September 20th and the download for iOS 7 will be September 18th.