Apple rose to the first spot after beating out numerous tech rivals including Google, Samsung and Microsoft (Interbrand)

According to a new report, Apple is now the most valuable brand over Google and Coca-Cola. Known as the “Best Global Brands” survey, Apple has dethroned the beverage corporation after Coke held on to the top spot for thirteen years.

The reason why Tim Cook’s company was able to claim the top spot was based on brand strength. From the successful launch of two new iPhones with the anticipation around iOS 7, numerous factors boosted Apple’s profile up to the spot.

This chart helped Interbrand make this decision. Innovation was the key and Interbrand felt that Apple products have reached a real pinnacle of creativity and design compared to the rest of the tech sector. (Interbrand)

Labeled as a “top riser”, Google follows in close second with Coke taking a bronze medal. Rounding out the rest of the top five is IBM and Microsoft pushing Apple’s rival Samsung down to eighth. The company behind this ranking is Interbrand, a brand consulting firm that has done this ranking since 2000. Two years ago, Apple was set in third place behind its other competitors.

Despite this achievement, some critics are puzzled since Tim Cook’s tenure has seen its fair share of issues. From the Foxconn labor scandal to the stock’s decline after the release of the two new iPhones, the company’s ascent has been rocky. Tim Cook seems to be proud of his staff as he just gave them Thanksgiving week off. 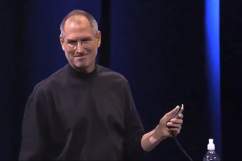 Read More
Apple, Business, Google, iOS 7, Samsung, Smartphones, Tim Cook
Apple is ranked as one of the most valuable brands in the world according to a new survey beating out Google, Samsung and Microsoft for the top spot.