UPDATE: Microsoft has made all of these videos private after a large amount of negative backlash but I was able to get the first video back online before the company took down the rest. They released a statement saying that these videos were “gentle ribbing” against their friends in Cupertino.

This is just sad. The iPhone 5S & iPhone 5C are two of the most anticipated smartphones coming out this fall. Apparently, Microsoft wants to ensure that the new Windows Phone gets the same amount of hype with these poorly made ads.

Titled “A Fly On The Wall At Cupertino”, the struggling tech giant uploaded a series of new videos on their Windows Phone youtube page poking “fun” at the Cupertino, California firm.

It attacks the new devices on every and images how the pitch meetings must have went leading up to the big reveal on September 10th. The inappropriate element of these skits is that the bald exec seen in a black turtle-neck clearly is supposed to be Steve Jobs. Another mind-boggling element of these videos that Microsoft never makes it clear HOW the new Windows Phone and its accessories will triumph over the iPhone 5S.

iOS 7 for the iPhones is far superior than Windows for these smartphones. With the glut of new gadgets entering this market for the winter along with the departure of Steve Ballmer, Microsoft just proved how desperate it really is to stay relevant in this Apple-dominated age. 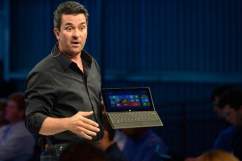 Sick of your iPad? Microsoft Will Pay You To Switch To Surface Tablets