With the anticipation for the iPhone 5S & iPhone 5C, fans are swarming Apple stores to obtain the new device. In order to quash fears that the company is past the point of innovation, CEO Tim Cook made a surprise appearance at the Palo Alto Apple store to see how sales were going.

The CEO demos the camera on the iPhone 5S (Getty)

The exec chatted with people waiting in line for the two new phones before heading into the store to welcome everyone according to The Verge. This was not Cook’s first visit to the store: he made an appearance there last October when the outlet reopened while Steve Jobs ushered visitors in October 2010 for the launch of new iPads.

Cook talking to a customer while a staff member of the store looks on. (Getty)

Other prominent members of the Apple leadership including SVPs Phil Schiller and Eddy Cue ventured out to the Stanford branch to meet with other customers.

For other product releases, you rarely see execs visit the customers on opening day. This was clearly a sign that Apple is positive its newest wares will sell well. Although reports indicate that inventory for the prestigious gold phone will be pushed to October, there is no doubt apple enthusiasts won’t enjoy these devices. 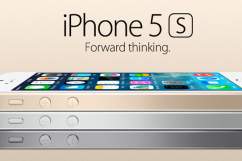 iPhone 5S: The Top 10 Reviews You Need To Read