Apple’s most prominent analyst thinks we may see a cheaper iMac and slimmer Macbook in 2014. (Getty)

KGI Securities Analyst Ming-Chi Kuo has unveiled his latest prediction for Apple revolving around their famous set of computers. He feels that the company would infuse its new product strategy for the two new iPhones into the iMac & Macbook series.

Kuo feels that Apple may want to “reboot” the line of computers after poor sales. Tim Cook and his team set the price too high and lowering the cost will help boost shipments for 2014. Also, a 12-inch high-res retina display Macbook is expected to accompany the desktop computers. Kuo’s note to investors emphasized that this laptop will redefine the entire brand.

The new Macbooks could contain similar features to the iPhone 5s. (Getty)

Kuo’s track record when it comes to Apple is strong so there is a solid possibility this could happen. It continues the trend that they started with the iPhones and are rumored to do the same thing for the upcoming iPad announcement. 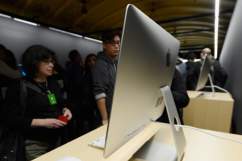