This new barge was pulled in off the coast of Portland. It looks similar to the mysterious craft floating in San Francisco. (Portland Press Herald) 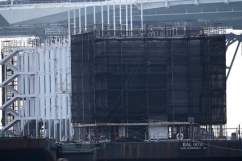 Over the weekend, a mysterious barge appeared in the San Francisco bay. CNET reported that this was a Google barge that could either be a data center requiring the water to cool it down or a prototype Google Glass store. The company hasn’t issued a comment on what this structure may be but a similar vessel has appeared off the coast of Portland, Maine.

The Portland Press Herald reports that the boat was hauled in on October 11th but the Coast Guard has not investigated it yet. Business Insider points out that the mystery barge came from the harbor in New Harbor, Connecticut. Browsing through these reports, this boat is actually the first one to appear but its possible twin was the most noticeable one since it was out in the open. This story is still developing but there should be no cause for concern that Google has us trapped. 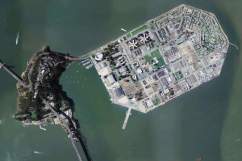