The new charging pad will arrive in the Google Play Store today. (Engadget)

Google has launched a new accessory for the Nexus 5. The wireless charging pad will be released with the new smartphone while the accessory will provide support for the Nexus 7. Details surrounding the device are still pretty vague but it should be compatible with any phone that has Qi-charge.

The interesting element housed within this contraption is its magnets. The Nexus 5 will cling to these in order to charge but it could mess with the internal specs such as the gyroscope. The waves emitted by them could alter some of the programming but these are risks every engineer considers when creating these gadgets. No price has been revealed but the pad should arrive in the Google Play Store at some point today in which we will update this post with more info. 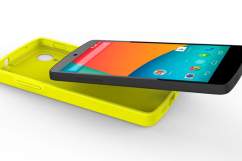