Google announced the HP Chromebook 11 on Monday and the first set of reviews are now in. Overall, the laptop has gotten some good marks in terms of performance and price. These are the top ten reviews you need to read.

“Unapologetically plastic” is apparently not just an Apple thing. Google and HP read from the same playbook, crafting the Chromebook 11 out of glossy plastic on top of a magnesium alloy frame. It comes in black and white, with four accent colors on the white model — red, yellow, blue, or green stripes encircle the keyboard and color the rubber feet on the bottom. Mostly it’s black or white, though, and both make a striking first impression. The white is bright and fun; the black stealthy, ominous. The Chromebook 11’s lid is empty save for the lit-up stripe of Google colors on the top, and the ultra-minimal look is pretty eye-catching.

The HP Chromebook 11 runs an ARM processor, similar to those used in smartphones and tablets. The dual-core Samsung Exynos 5250 processor handles most things well (though see below – that doesn’t include everything). Playing video or music or browsing complicated websites is fine. Its low-power nature means that fans aren’t required for cooling, so it’s completely silent in operation.

The fun thing about testing a Chromebook is that you have a free pass to surf the web to your heart’s content. In the absence of many benchmarks to run, the real measure of such a device’s performance is how it handles the web and web-related apps. To that end, I opened two dozen or so browser tabs, edited documents in Google Drive, tried out the very unflattering VGA webcam and watched some HD clips on YouTube. The Chromebook did trip up and require a restart once, but overall it handled apps, browsing and video streaming well.

With an ARM-based Exynos 5250 SoC and 2GB of RAM, this machine makes no pretense of being a powerhouse. At the HP Chromebook 11 announcement event, Google reps emphasized that this machine is fanless, so don’t even think about whipping this laptop into an overclocked frenzy. For more modest use, though, this guy is fine. In SunSpider, it notched a score of 768ms, which isn’t stellar but falls in line with other Exynos-powered Chromebooks.

The little 2.3 pound Chromebook has all the limitations of previous iterations. You can only run software inside the Chrome browser and it won’t run any of the major desktop applications that run on Windows and Mac machines. It also has a paltry (16 GB) amount of storage and even though it’s possible to run some apps offline, it pretty much requires an Internet connection to take advantage of many of its features.

But, with an improved screen, a solid feel and a very handy new charging system, the $279 Chromebook has a lot going for it

With the Chromebook 11, HP has done just that. It sports a sharp 11-inch (1366 x 768) display that provides wide viewing angles (176 degrees, to be exact) thanks to the inclusion of an IPS panel, which provides deep blacks and makes colours ‘pop’.

Chrome OS’s animations – whether that’s switching from full-screen to windowed mode or the taskbar fading out – are more visually appealing than ever before.

A review unit of the new HP Chromebook 11 just arrived and I can already tell the improved display will make some people happy. To my eyes, the IPS display looks clearer and colors appear more vivid than on my older Chromebooks — save for the Pixel — even though most of them have the same 1366 x 768 resolution. The aspect ratio makes the screen look wider too.

Audio. Wow, Google Music pumping through my Harmon Kardon SoundSticks punches more aerial definition and better soundstage than either Chromebook Pixel or MacBook Pro with Retina Display. Seriously — and that’s without cranking volume way up, which I must do on the Pixel.

In our brief hands-on time, the Chromebook 11′s keyboard offered good travel. In a wise move, Google placed the speakers for the Chromebook 11 underneath the keyboard. Google says it worked with HP to fine tune the speakers, and the result is fairly crisp audio. When we streamed “Roll Away Your Stone” by Mumford & Sons, the audio was loud without being tinny.

The keyboard uses essentially the same layout as that of the Pixel, which means full-sized keys in a straightforward layout. Like other Chromebooks, it lacks the equivalent of the Command or Windows key that you’d find on Mac or PC keyboards, in favor of double-width Ctrl and Alt keys on the left. The Caps Lock key continues to be supplanted by a Search key, but you can re-map it to Caps Lock in the settings if you need to yell on the Internet more often than you need to search for things. The trackpad in this Chromebook is reasonably accurate and responsive, though we’ll have to type on the system for a bit more time before we can say for sure how it handles things like palm rejection.

Inside, the Chromebook 11 is running a dual-core Samsung Exynos processor — the same, it seems, as Samsung’s own $249 model. It has 16GB of onboard storage, 2GB of RAM, and two USB ports. There’s no touch screen, but the 11.6-inch IPS display boasts a decent 1,366×768-pixel resolution, and looks brighter and sharper from various viewing angles than any other budget Chromebook.

Unfortunately, the HP Chromebook 11 loses two niceties found on the earlier Samsung, which remains available for $30 less: there’s no SD card slot and no full-size HDMI port. (The Micro-USB charge port also doubles as an HDMI output, but you’ll need a special cable to connect to a TV or monitor.) Both of those are pretty important and useful ports. But, it’s clear that Google is pushing Chromecast: the Chromebook 11 supports Chromecast, and using it could potentially serve as a wireless alternative to HDMI. But, even with two years of 100GB cloud-based Google Drive storage included, having an extra storage slot via SD card would be helpful. For camera connectivity, you can still connect via USB. 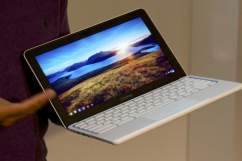