1. The Tablet Can Be Adjusted For Several Different Modes

The Yoga operates similar to the laptops due to the kickstand that can be adjusted for comfort. (Getty)

Last night, Lenovo revealed the Yoga tablet to a packed audience in Los Angeles. Taking inspiration from their line of laptops, the tablet has a cylindrical handle which allows for different modes. For example, the “hold” mode can turn the handle for a comfortable grip when reading ebooks or be adjusted to launch a kickstand while watching movies.

2. The Yoga Tablet Has A Powerful Battery

Two dual batteries are housed within the tablet allowing for 18 hours of performance without a charge. (Getty)

After maneuvering the tablet for the best level of comfort, you’ll notice the large built-in battery. The Yoga’s core is capable of holding a charge for 18 hours. The 2-cell Li-Polymer power cell is what Lenovo feels is the reason why they can brag about this feature.

3. Other Features Include Two High-Res Cameras

The cameras will be two elements that Ashton Kutcher will promote in his new series of commercials. (Getty)

Rounding out the rest of the package are two high-res cameras on the front and back. For the front, the 1.6 megapixel camera supports the 5 megapixel feature found on the back. A Micro-USB port for charging is located on the front of the Yoga. Ports located next to the Micro-USB are a microSD storage expansion slot, a headphone jack and a volume rocker.

At the event, Ashton Kutcher walked out to tout the latest innovations Lenovo has incorporated into the Yoga tablet. Kutcher will serve as the spokesperson for the device and has officially become a product engineer for the company. The Jobs star has invested in several different tech startups and has some expertise in this area. Ultimately, his role will be to market more of these tablets around the world.

5. The Yoga Tablet Is Available Today

Kutcher will be promoting other Lenovo products as well. (Getty)

Powered by Android 4.2 (Jelly Bean), the 8-inch and 10-inch tablets are available to purchase from the company’s website. The smaller version sells for $249.00 while its larger cousin goes for $299.00. 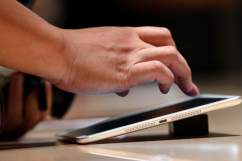