The tech encased within the phone could have some peculiar abilities similar to a popular superhero. (Ars Technica)

Taking inspiration from a particularly popular clawed superhero, the phone can HEAL ITSELF. While it doesn’t seem to be able to recover from large amounts of damage, the device can deal with light scratches that are instantly fixed on the back cover. The press release LG distributed didn’t fully explain how this works but when this phone hits the market, hundreds of customers are sure to line up for this.

LG is throwing down the gauntlet against Samsung claiming that they have the best flexible phone. (Engadget)

After months of leaks and Samsung unveiling their own version a few weeks ago, LG has produced its own flexible smartphone called the G Flex. The company feels that this is the first ‘real‘ flexible offering. LG touts the ability to make calls and provide a more immersive video viewing experience among other features.

The G Flex has a powerful internal processor with the standard amount of RAM found in most phones. (Slashgear)

The self-healing ability is by far the most impressive element of this gadget but it has a few other specs that make this appealing. The G Flex will come equipped with a six-inch 720p display that will be nearly unbreakable. Powered by a 2.26GHz quad-core Snapdragon 800 processor with 2GB RAM, the G Flex will have a 13 mega-pixel camera. The G Flex will operate on Android 4.2 but no price has been revealed.

4. No Release Date Is Known

The Samsung Galaxy Round could come out before the G Flex in the U.S. (Samsung)

LG will ship the phone to three mobile carriers in its home country but don’t expect it to come to the U.S. before the end of the year. The press release did not reveal when it could come overseas but Samsung’s own creation may arrive sooner rather than later especially with the increased competition.

5. LG Insults Samsung Over Their Galaxy Round Smartphone

Samsung may want to reconsider the Galaxy Round since LG seems to believe that it has a considerable advantage over them. LG’s press release has claimed its phone excels over the others. It’s puzzling as to why they feel so proud considering that the G Flex and Galaxy Round are the first few devices that have capitalized on this new tech trend. While G Flex may be the first item that has figured out the best way to harness a flexible screen, there is a chance someone else will improve upon it. 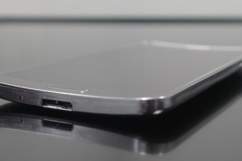