Apple’s new iPad Air will be arriving in stores on November 1st. The first series of reviews have arrived praising the tablet and considering it to be an excellent purchase. Should you buy it? These are the top ten reviews you need to read.

The new iPad weighs just 1 pound, down from 1.4 pounds for the previous top-of-the-line model, the iPad 4, which is being discontinued.

And it has done all this while maintaining the iPad’s industry-leading battery life. In my tests, the iPad Air far exceeded Apple’s claim of 10 hours of battery life. For more than 12 hours, it played high-definition videos, nonstop, with the screen at 75 percent brightness, with Wi-Fi on and emails pouring in. That’s the best battery life I’ve ever recorded for any tablet.

Mossberg was impressed with how Apple streamlined their services with the newest iPad especially since they slimmed down the popular tablet.

This smaller size is great. If you have decent sized hands you can type with two thumbs on the iPad in portrait, something I wasn’t really able to do with the last generation iPad without a lot of stretching. Clearly a full-size iPad is not something you will be thumb typing with all the time1, but it does give you an idea of how much smaller the iPad Air is.

Dalrymple liked the smaller size. He felt that Apple infused a brand new level of comfort within the tablet. He listed tasks that were made much more manageable with the reduced weight.

Apple’s now spreading its powerful A7 chip across the top tier of its mobile products line. Although the company assiduously avoids details about mobile CPU clock speeds, we know that the A7 is a 64-bit dual-core CPU that runs at roughly 1.3GHz. Amazon is currently packing Snapdragon 800 quad-core CPUs in its new line of Kindle Fire HDX tablets. I can tell you from experience that the new Kindle Fire plenty fast. Even so, the Apple iPad Air’s dual-core A7 felt just as powerful. No process or task ever lagged.

The A7 chip first appeared in the iPhone 5s. By including this within the tablet, the iPad Air has incredible speed when joined with the M7 co-processor. Ulanoff points out that these internal specs push the tablet as a powerful rival to the Amazon Kindle Fire HDX.

If there are faults with the iPad Air, the only two I can find are the suggestion, in the branding, that it’s a totally new product, and the fact that the smartcover now adopts the flimsier three-panel design used in the original iPad Mini. But these are tiny issues. This is the iPad that was already brilliant in an even better design. Almost entirely thanks to the 475,000 tablet apps, iPad Air is the best tablet on the market. And Kindle fans beware – the Air is now more useful for reading, its clever software knowing whether your thumb is interacting with the device or simply holding it.

Presenting an interesting counter-point, Warman feels that the branding and smartcovers have minor flaws. Warman feels its not really a new iPad based on the specs and that the smart-cover should be a little sturdier. Overall, he liked the tablet.

Tablet cameras are always good in a pinch, but they’re often not given the royal treatment when compared to the latest and greatest smartphones. Apple opted not to make any major changes to its rear iSight camera, so the 5-megapixel BSI f/2.4 shooter with AF found in the previous two iPads is still there. We’ve been generally pleased with the overall image quality, and indeed, our thoughts haven’t changed here. While attempting to fire off a series of shots, we found that we could take 12 photos in a five-second period. Also, as before, you won’t get a flash of any kind and nighttime shots are rather fuzzy and noisy. We’d also like to see more modes on the Air’s camera, such as panorama, burst mode and slow motion; as it stands, settings are virtually non-existent unless you count HDR, square mode and post-image editing.

Focusing on the camera, Molen thought it was a good move that the company didn’t mess with the camera that much. Usually, tablet cameras are not the highlight of the device but he notes that they should have expanded upon the feature just a little.

So how does the Air stack up? Compared with the Mini, the question really boils down to size. If all you want to do on a tablet is read books or watch movies, the smaller screen is excellent, and you can save $100 (the cheapest model of the Air costs $500. The new Mini costs $400). But I use the iPad for work, reading documents and occasionally even editing or writing on it. I also use it as a second screen (actually it’s a fourth, but we won’t get into that) on my desk for research on the web. The extra real estate provided by a larger screen matters at the office.

If you decide you need the bigger screen, you will find a lot of benefit in the iPad Air. In addition to being light and slim, it loads apps and web pages quickly — faster than the old iPad, because Apple tailored software to mesh with the custom A7 processor and vice versa.

Darlin thinks that the iPad Air has its perks but the mini 2 could be an excellent alternative. The iPad Air works well for certain tasks.

Users who connect over Wi-Fi, on the other hand, will see an immediate impact from the Air’s dual antennas and updated wireless technology.

In side-by-side tests over the same Wi-Fi network with a third-generation iPad, the Air was faster at downloading and rendering pages, every time. It was also consistently faster than Microsoft’s new Surface 2, the Kindle Fire HDX and Google (GOOG)’s Nexus 7.

Yes, that’s really a lot more than you’d pay for a Tesco Hudl. Or an Argos MyTablet. The latter, though, truly is a waste of money (in testing for our video review of the tablets, the on-screen button for the MyTablet didn’t respond to a touch in any orientation across five different takes).

Arthur thinks the price is accurate of the features the iPad Air has. It’s more than its competitors but is worth it for the abundance of accessories that it comes with.

The design is the star of Apple’s iPad Air refresh this time around; the 9.7-inch Apple tablet has had the same form factor for two generations now, and that one actually made the design worse – it got heavier, and it got thicker. This new iPad mini-inspired look sheds both size and weight, giving the iPad Air a 43 percent smaller bezel, a 20 percent thinner case, and making it 28 percent lighter, at just one pound.

Leading up to the announcement last week, the biggest rumor was that the iPad Air would look just like a mini 2. The reduced weight and thinner specs make it a more comfortable option and a significant improvement over the previous generation.

We had to do a double-take at our battery percentage a couple of times because we’re so used to iPhones and MacBook Pros tearing through charge like the Stuff team tears through Skittles. But like the heftier iPad 4, this is an all-day tablet – as long as you’re not foolhardily running on full brightness the whole time. During the course of a week, as we got over hammering the Air with downloads, apps and games and settled into a normal routine, the iPad lasted a day and a half to two days.

It even held up when we were using the Air as a personal 4G hotspot, and consistently hung on to the last 5-10% for hours at a stretch. Unlike its predecessors, which crammed in more capacious batteries, it doesn’t take all night to re-juice either. Stay tuned for a HD video rundown test versus times from its Android and Windows 8 rivals.

Charara notes how powerful the new battery is. She provided a thorough test of the product and found it held a strong charge after a variety of tests. 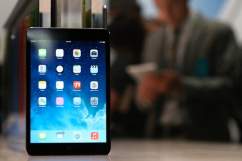 Apple’s New iPad Air vs. iPad Mini 2: Which Should You Buy?

Read More
Apple, iOS 7, iPad Air, Top 10
Apple's iPad Air will be released November 1st so should you buy it? These are the top ten reviews you need to read about the newest tablet.