The new Macbooks may face some serious competition against the HP Chromebook 11. (Getty)

Apple has revealed new updates for the next set of Macbook Pros. These computers have more memory capacity and longer battery life compared to its predecessors. A few weeks ago, Google unveiled the HP Chromebook 11 which could be a viable substitute. The macbooks have shipped to the Apple Store so which should you buy?

The macbooks look the same on the outside but Apple altered the entire internal system. Each model will run on OS X Mavericks but the price may vary. The 13 inch will cost $1299 while the 15 inch will cost $1999. The memory storage in these computers is pretty powerful like the 15 inch with a 2.6 GHz processor. Apps such iPhoto and Garageband were updated as well giving the system an excellent array of work functions to choose from.

The HP Chromebook 11 could be the next best thing if you don’t think Apple is all its cracked up to be. (Gizmodo)

The HP Chromebook premiered a few weeks ago but there are a number of attractive elements that could make this a viable alternative over the Macbook. The cost is the first positive thing to note. Coming in at $300, the laptop is perfect for cost-concerned consumers. The Chrome OS embedded on it moves quickly and efficiently while it can store 16GB of memory. Although some of these details are inferior compared to the macbooks, this particular machine is already on the market. 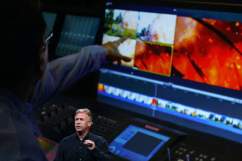 The Chromebook wins this round. The low price combined with the amount of storage makes it a pretty strong option. While the Macbooks have their perks, Apple occasionally saddles certain gear with too many accessories that aren’t needed. Essentially, the Chromebook will be a perfect choice for the amount of money you spend. 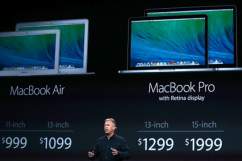