Alexis Ohanian, the founder of reddit and author of “Without Their Permission”, delivered a rousing speech on the internet at The Next Web Conference 2013. Here are five fast facts you need to know.

1. Ohanian Explains The Origin Of His Company

At #TNWUSA listening to @alexisohanian talk about comics… and burritos. pic.twitter.com/ibwBCJtg4Q

The founder of Reddit told the audience how Reddit began. In 2005, he went to go see Paul Graham talk in Boston on how to start a startup. He constantly feels like he should be failing but he doesn’t know why. He shows the first version of Reddit, calls the first one “janky” and feels like it still is very janky.

2. Ohanian Wants To Tell Stories About His Friends On The Internet

He explains how his friends are changing the world in a material way. Ohanian mentions the power of the internet and how anyone can become a cartoonist with a few simple programs. If you wanted to be a professional cartoonist, you had to appeal to someone professional and seek the favor of your bosses. Instead, you can now use the world wide web to gain mass exposure for your work.

3. Ohanian Feels That New York City Is The Best Place To Create A Start-Up

The founder tells the story of Gary Larsen but continues to more uses for the internet. There’s alot of noise on the internet. He advises the audience to be “better” and convince someone your content is worth their time.

4. Kickstarter Has Played A Huge Role In Helping Unrecognized Talent

The timing and execution of Kickstarter is what makes it so revolutionary even though it could have been made in 2005. Ohanian helped Lester Chambers achieve his fame for creating music that he always wanted. Crowdfunding is still evolving but we still don’t where its headed.

5. Platform Development For The Internet Will Continue To Evolve

Ohanian is so proud of start-ups. He wants people to become more entrepreunurial and just begin to develop different projects. He feels that there is too much of a stigma and feels that the internet has made this the best thing to have ideas come to life. Ohanian will stop at 75 universities to meet with students who may have undiscovered projects. 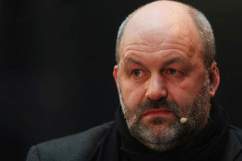