Susan Bennett has come forward claiming that she is the voice behind Siri. Here are five fast facts you need to know.

1.Bennett Is An Atlanta-based voice over artist

This is the voice of Siri (CNN)

“I wasn’t sure I wanted the notoriety,” she told CNN on why she never came forward before now. She recored quotes for the assistant in 2005 but Apple acquired the company that created Siri in 2010. When she recorded the voice, she wasn’t exactly sure what the purpose would be.

2. Apple Has Not Acknowledged Her Participation

In the video, Bennett admits that the company has never admitted her involvement. However, legal authorities working for her claim she is the voice behind Siri. An audio specialist with 30 years of experience has proven her claim as well.

3. She Came Forward After An Article Written By The Verge

This particular article about synthesized voices inspired her to come forward. The story alleged that another artist named Allison Dufty was the real Siri source which compelled Bennett to get legal representation before announcing this big reveal. The video above follows workers at Nuance, the company where Siri was created.

4. Today Is The Two Year Anniversary of Siri

Two years ago today, Siri was introduced along with the iPhone 4s. Despite that, the inclusion of iOS 7 could mean that Bennett’s reign as the voice of this OS is coming to an end. iOS 7 lets you shift Siri’s voice to a male tone which means Bennett’s notoriety is slowly fading away. Now was probably the best time announce this news. Two

5. CNN Discovered This While Working On A Different Story

CNN found out this news from a story about the busiest airport in the U.S. 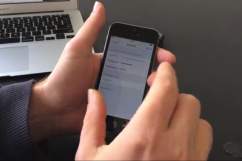