The Apple logo is one of the most iconic symbols in the world. The fruit-shaped insignia serves as a marker for high-quality products. The current iteration is the plain black Apple housed on the back of most of the “iGear” sold in stores but a new video that has appeared online shows the sign only went through a few redesigns before reaching its current form.

Tweeted by Huffington Post Tech, the video starts with the creation Steve Jobs and Ronald Wayne came up with in 1976. The image is Isaac Newton sitting under an Apple tree possibly predicting the ideas that would strike Jobs in the next few years. The transition towards the rainbow logo may have been indicative of the slogan at the time which was “Byte into Apple”. Ultimately, Jobs liked simplicity which is why the brand’s symbol has undergone minor modifications before settling on the basic black and white. 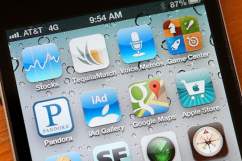