The “thumbs up” symbol is gone and replaced by the Facebook “F”. The word “Like” is attached to it while the overall look has been doused with a new shade of blue. Facebook Product manager Ling Bao claimed that the new paint job proved to be the most difficult part of the process. The translation aspect was difficult too. Another new element is that the share and like buttons can be customized on a page. As you can see in the image above, both buttons can be placed side by side. If you see the update on your page, leave a comment. 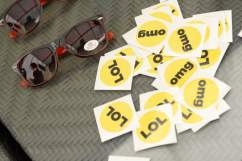