A concept video shows the iPhone 6 as having a huge 445 PPI screen, losing the home button, and becoming the iPhone Air, could it be an accurate prediction? Well, it is very well possible. For one, it is likely Apple will stick with a smaller phone, but they will want to make sure the resolution gets much better — lest they lose out to competition from phones like the Nexus 5.

One sticking point, however, is that Apple will likely aim to keep the phone snug and usable by just one hand.

Yet another rumor claims Apple is planning to launch a new iPhone with an even larger display late next year, and that the company may promote the so-called “iPhone 6” as the first big-screen phone able to be operated with just one hand.

Either way, it will be exciting to see how the iPhone 6 develops. It would be unsurprising to see Apple go with the “Air” moniker, but hopefully, the improvements will be more revolutionary than just smaller and lighter. 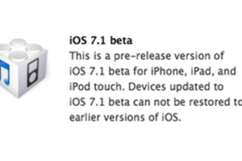