Mackenzie Bezos, the wife of Amazon overlord Jeff Bezos shared a few words on the website about the new book written about her husband. (Getty)

One of the most well-known features of Amazon is that the online retailer allows customers to leave reviews about products. This practice provides consumers with more insight into the product they are about to purchase. These blurbs can range from books to clothing. This part of the platform is open to anyone, even the wife of Jeff Bezos.

‘The Everything Store: Jeff Bezos and The Age of Amazon’ is written by Businessweek reporter Brad Stone. The novel is an incredible account on how Bezos came from nothing and ran the most popular website in the world. Of course, the diatribe doesn’t incite controversy but Mackenzie takes some issues with the facts Stone used from his research. Remarkably, the book has received great review but her 1-star critique isn’t exactly flattering. Her entire explanation is written below in case you’re interested.

In the first chapter, the book sets the stage for Bezos’s decision to leave his job and build an Internet bookstore. “At the time Bezos was thinking about what to do next, he had recently finished the novel Remains of the Day, by Kazuo Ishiguro, about a butler who wistfully recalls his personal and professional choices during a career in service in wartime Great Britain. So looking back on life’s important junctures was on Bezos’s mind when he came up with what he calls ‘the regret-minimization framework’ to decide the next step to take at this juncture in his career.” It’s a good beginning, and it weaves in nicely with what’s to come. But it’s not true. Jeff didn’t read Remains of the Day until a year after he started Amazon.

If this were an isolated example, it might not matter, but it’s not. Everywhere I can fact check from personal knowledge, I find way too many inaccuracies, and unfortunately that casts doubt over every episode in the book. Like two other reviewers here, Jonathan Leblang and Rick Dalzell, I have firsthand knowledge of many of the events. I worked for Jeff at D. E. Shaw, I was there when he wrote the business plan, and I worked with him and many others represented in the converted garage, the basement warehouse closet, the barbecue-scented offices, the Christmas-rush distribution centers, and the door-desk filled conference rooms in the early years of Amazon’s history. Jeff and I have been married for 20 years.

While numerous factual inaccuracies are certainly troubling in a book being promoted to readers as a meticulously researched definitive history, they are not the biggest problem here. The book is also full of techniques which stretch the boundaries of non-fiction, and the result is a lopsided and misleading portrait of the people and culture at Amazon. An author writing about any large organization will encounter people who recall moments of tension out of tens of thousands of hours of meetings and characterize them in their own way, and including those is legitimate. But I would caution readers to take note of the weak rhetorical devices used to make it sound like these quotes reflect daily life at Amazon or the majority viewpoint about working there.

For example, when the author does include people whose accounts of a supportive and inspiring culture contradict his thesis, he refers to them dismissively throughout the book as robots. In an archive of the thousands of thank you messages written to Jeff over the years, a small sampling includes “I just wanted to thank you for giving my husband the opportunity to work for your company so many years ago and let you know that he always spoke kindly and enthusiastically of the distribution center, the people and you.” “Having finished my shift I thought I would send you a short email to say thank you. There is a fantastic team based here and we have super support. Our mentors are true Amazon angels providing guidance and showing great patience.” “I cried as I read the Career Choice announcement on Amazon today. What Amazon is doing to help its employees is affecting lives in the most meaningful way I can think of. It restores my faith in humanity.” It seems like unbalanced reporting to avoid including the point of view of more people like these (and to use narrative tricks to discredit those who are included), given how plentiful they are.

In light of the focus in many of the reviews here and elsewhere on what the book “reveals” about Jeff’s motives, I will also point out that the passage about what was on his mind when he decided to start Amazon is far from the only place where the book passes off speculation about his thoughts and intentions as fact. “Bezos felt…” “Bezos believed….” “Bezos wanted….” “Bezos fixated…” “Bezos worried….” “Bezos was frustrated…” “Bezos was consumed…” “In the circuitry of Bezos’s brain, something flipped…” When reading phrases like these, which are used in the book routinely, readers should remember that Jeff was never interviewed for this book, and should also take note of how seldom these guesses about his feelings and motives are marked with a footnote indicating there is any other source to substantiate them.

One of the biggest challenges in non-fiction writing is the risk that a truthfully balanced narration of the facts will be boring, and this presents an author with some difficult choices. It may be that another telling of the Amazon story—for example, that people at Amazon have no secret agenda they’ve been able to keep hidden for 19 years, really do believe in the mission they keep repeating, and are working hard and of their own free will to realize it —would strike readers as less exciting than the version offered here. I sympathize with this challenge. But when an author plans to market a book as non-fiction, he is obliged to find a suspenseful story arc that doesn’t rely on mischaracterizing or avoiding important parts of the truth. I am grateful this is the era of the Internet, when characters in non-fiction can step out of books, as Jonathan Leblang and Rick Dalzell have done, and speak for themselves. Ideally, authors are careful to ensure people know whether what they are reading is history or an entertaining fictionalization. Hollywood often uses a more honest label: “a story based on true events.” If authors won’t admit they’ve crossed this important line, their characters can do it for them. 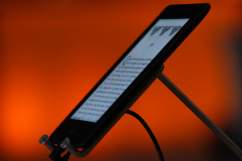