Amazon has announced ‘Betas’ as one of their new streaming shows for the fall. Coming online November 22, the comedy will join Alpha House as the retailers first two shows. Just like ‘Alpha House’, the first three episodes will be available for free on Amazon Instant Video while the rest of the series can be watched through Amazon Prime. ‘Betas’ follows four friends who struggle to make it in the insanely competitive Silicon Valley startup landscape. Promoting their new social dating app, these buddies look to make it big while dealing with every obstacle that comes in their way. Watch the trailer above and check out the official description below. 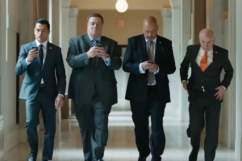