Although Halloween has come and gone, The Daily Show’s Jon Stewart had a dire warning last night for his audience. The mysterious Google Barge that has been seen floating in various parts of the country could be the start of a “bad horror movie“. Although we may have gained some insight into what these structures actually are, Stewart’s point about how this out of the ordinary for even this company is very true. The comedian even had time to throw a couple digs at the inflated Google+ numbers culminating his speculation rant warning us that a famous giant sea monster could rise from the depths of the ocean. Give it a watch above. 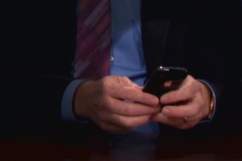