If you’re here, congratulations, you have the opportunity to be an early adopter – even if it’s just of information. While most of the public is still figuring out what Bitcoin is, dozens, possibly much more, of legitimate competitors are emerging. Most of them are utterly forgettable, crypto pumps and dumps, if you will. Of course, it remains to be seen just how valuable cryptocurrency in general can be. Whatever the case may be, Litecoin has emerged as something far more substantial than a Bitcoin copycat. Here’s 5 Fast Facts.

1. Litecoin is Similar to Bitcoin in Code, But has Functional Differences Especially in Speed

*= According to this analysis.

Let’s start with the 4x faster confirmation time. Bitcoin transactions require confirmations to be considered complete. This can get confusing, but what it really boils down to is that Bitcoin is “mined,” by vastly powerful computers recording and solidifying transactions to prevent the biggest problem with cryptocurrency, double-spending. In other words, people spending money twice.

Bitcoin is supposed to take 10 minutes per confirmation (I’ve never experienced a time this fast though) thus leading to an average confirmation time of 30 minutes because it takes 3 confirmations to be very sure the transaction is valid.

2. Litecoin May Be More Secure Than Bitcoin

A reddit user breaks down the security of the two cryptocurrencies in this post. Essentially, they say that Bitcoin is more safe per block, but Litecoin is safer given the same amount of time to confirm transactions.

The only scenareo where litecoin is less secure than bitcoin is when you compare the two networks block to block [sic]. As a function of time litecoin is significantly more secure, so much so litecoin offers similar security at 20 minutes as bitcoin does at 60 minutes.

It’s debatable as to whether this is valid or not, but regardless, both currencies are susceptible to an attack called the Time Warp Attack.

This is a a screencap of BTC-E.com, a website that allows you to trade Bitcoin for Litecoin. Litecoin hit its highest price of all time today and its value was over 2% that of Bitcoin’s total value. This represents a new high for the cryptocurrency.

4. 84 Million Litecoins Can Be Created, 4x as Many as Bitcoin

At this point, 23 million Litecoins already exist, more than the number of Bitcoins that ever will; there are only 21 million Bitcoins that can be created.

This chart from Bitcoin Wisdom shows how it gets harder to mine Litecoin as time goes on.

5. Some Say Litecoin is ‘Silver to Bitcoin’s Gold’

Litecoin’s creator was interviewed by Chron.com. The article reads:

So maybe it’s better to understand Litecoin as “silver” in the medieval sense of the word: designed to be carried around in your virtual pocket for daily transactions.[Litecoin’s creator] said “If Litecoin truly succeeds, people will be using it for everyday purchases, and Bitcoin for large purposes.”

At $800, the price of Bitcoin is now so great that it threatens to shut out some mainstream users.

Check out this graphic for even more info about Litecoin (though you can gauage its date by the number for market cap being 50m USD; that number is now 10x that, at nearly 500 million dollars: 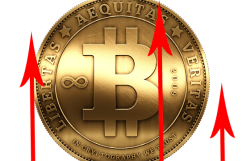