Angry Birds Go! is a new free-to-play kart racing game by Rovio Entertainment, and the newest installment in the Angry Birds line of games. Angry Birds Go! features the angry birds and bad piggies we have grown to love over the past few years. The gameplay and mechanics are very similar to Mario Kart and other kart racers, and the learning curve is quite low for kart racing novices.

Players will be thrown into Piggy Island, which is the first colorful 3D world in the Angry Birds game series. Players have the option of either tilt or touch controls for steering. Tilt controls are very reminiscent to Mario Kart Wii, where players must tilt their iOS device left or right to steer. Touch controls allow players to press either ends of the screen to steer. When beginning the game, players will be guided through a short series of tutorials before jumping into proper tracks. 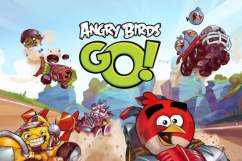 In traditional Angry Birds fashion, players will use a slingshot to fling their kart onto the each track. During each race, players can collect coins to purchase vehicle upgrades, and use power boosts to speed ahead of your opponents. Coins can be used to purchase upgrades to top speed, acceleration, handling, and strength. Players collect crystals after the end of each race, which are used to unlock more tracks.

Since this is a free-to-play game, players can make in-app purchases to unlock new levels and characters with special powers. By default, the game includes characters like Red, Chuck, Terence, Stella, King Pig, Moustache Pig, and many other favorite characters. Game modes include: Race, Time Boom, Fruit Splat, Champion Chase and Versus Mode.

Overall, Angry Birds Go! is a fun kart racing game available for iOS and Android platforms. Playing Angry Birds Go! on an iPad or Nexus 7 looks incredible, and players can truly appreciate the intuitive controls and stunning graphics on a large screen. Although Angry Birds Go! has in-app purchases, the game can be fully enjoyed without spending any money at all. Because of its fun, addicting, and familiar gameplay, fans of the Angry Birds game series or kart racers in general can easily fall in love with Angry Birds Go!.

Angry Birds Go! is available for free on the App Store and Google Play Store.