Looking to get involved in the cryptocurrency markets? With Bitcoin’s price booming, many people are excited about the current and future prospects of “crypto.” Here are some ways you can buy Bitcoin, Litecoin, and Ethereum using government issued money or other cryptocurrencies. In general, the easiest way to get any cryptocurrency is to first buy Bitcoin, and then trade for the altcoins (though this is not true for Litecoin and Ethereum, which can be purchased on Coinbase).

Here are the top five best Bitcoin exchanges to buy, sell, and trade for crypto.

1. Buy Bitcoin, Litecoin, or Ethereum in the USA (and 33 other countries) Using Coinbase.com

Armed with only a bank account, you can buy Bitcoin, LTC, Ethereum or Bitcoin Cash from Coinbase fairly quickly and easily. Bitcoin has instant verification with Chase bank, so it’s the recommended choice if you have a few bank accounts. If you can’t afford a full Bitcoin, don’t worry, you can buy portions of the cryptocoins as well. They’re not like shares. Most cryptocurrencies have divisible units. A Bitcoin, for instance, can be divided into 100 million parts, each called a “Satoshi,” named after Bitcoin’s creator.

2. Another Popular Alternative: CoinMama (Limited to certain US States)

Many users love Coinmama as a Coinbase alternative. Coinmama accepts cash and credit card and is a great alternative. That said, it can only be used in certain states (California, Colorado, Florida, Illinois, Indiana, Kansas, Massachusetts, Michigan, Montana, New Mexico, North Carolina, Pennsylvania, South Carolina, Tennessee and Texas reports 99bitcoins.com). Coinmama also charges 5% for using a credit card and it’s Bitcoins generally cost more. The biggest advantage to Coinmama is enhanced privacy; Coinbase has been known to track users and ban them for spending funds in ways it deems suspicious or inappropriate.

For people who may lack bank accounts or would prefer to do things without involving Coinbase or banks, Local Bitcoins is a popular alternative. There are many sellers and they’re all rated, so one can be sure to purchase from a reliable source.

4. Trade or Daytrade Bitcoin or Ether for Many Different Cryptos at Binance.com

Binance has emerged as the best way to trade BTC and Ether for a large variety of different (yet more reputable) cryptocurrencies including Neo, Request Network, and other popular emerging “altcoins.” Binance offers reasonable trading fees and is considered by man to be reliable and fast. That said, it can be overwhelming for crypto beginners. It is also not a US-regulated exchange, so like most cryptocurrency websites, it poses a risk that isn’t found on a site like Coinbase.

5.Check out even more on options on R/Bitcoin

Looking for an exhaustive guide to buying, selling, and trading Bitcoin? Reddit.com/r/bitcoin’s Newcomer FAQ has a huge lot of information regarding buying BTC, buying things with BTC, and storing your own cryptocurrency. It’s a great read. If for whatever reason these options don’t work for you, there is bound to be something on reddit that does. 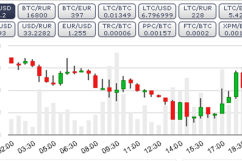 Why is BTC-E Bitcoin Cheaper and Lower in Price Than Other Markets?

Heavy, Inc. is a participant in the affiliate programs of Coinbase, Coinmama, and LocalBitcoins, affiliate advertising programs designed to provide a means for sites to earn advertising fees by linking to them.

Read More
Bitcoin, Cryptocurrency, Litecoin, Shopping
wpDiscuz
5
0
Would love your thoughts, please comment.x
()
x
| Reply
If you're trying to turn cash into cryptocurrency, here are the best ways to do it.