Dogecoin has risen in value, attention, and adoption since its December 8th debut. Here’s 10 Facts You Need to Know about this exciting cryptocurrency based on what is variously classified as the doge, dogge, or shibe memes. For background information on the coin, see the original article here.

1. Dogecoin Was Briefly The Most Valuable Cryptocurrency in the World


As you can see above, Dogecoin was the most valuable cryptocurrency by market capitalization earlier today. This happened because a buyer at CoinedUp placed a bid that valued Dogecoin at .5BTC for a single Dogecoin (also known simply as doge). While the value of the trade is unknown, it’s unlikely that it was a large purchase because the buyer would stand to lose much money at such a tremendous valuation of DOGE (currently, anyway). As of 12/16/13, 5:00PM EST, Doge is worth a more modest .03BTC per 100,000 dogecoin, a drop of -99.99994%.

2. Due to the Price Jump, The Market Capitalization of Dogecoin was Briefly 2.8 Trillion Dollars

HowStuffWorks estimates that the amount of United States dollars in circulation is around 2.5 trillion dollars, so for a brief moment, all of the cash in the United States could not have purchased all of the Dogecoin, at what was then, the present market value.

3. Despite the Massive Fall, Dogecoin is Still Gaining Massively in Price

While it’s no surprise that Dogecoin isn’t worth 2.8 Trillion dollars, the price has still raised dramatically. From the time of writing our first article about Dogecoin, the price was roughly $1 per 10,000 Dogecoin, now real, substanial purchases have been made at the rate of $1 per 1000 Dogecoin, as seen in this ebay purchase:

4. Dogecoin is Also Receiving Massive Attention on Reddit and the Web


Redditor JayQuery took a screencap of other popular cryptocurrency subreddits and noted that Dogecoin was among the most popular. Since our last article published about a week ago, many pieces have been written about Dogecoin, including a Wikipedia article.

Respected Tech giant, The Verge has even covered Dogecoin saying, “Bitcoin is so 2013: Dogecoin is the new cryptocurrency on the block.” Wow.

5. Dogecoin Can Now Be Easily Exchanged for Bitcoin and is Rumored to be Coming to Cryptsy

Marking the first sign of a legitimate cryptocurrency, Dogecoin can now be easily traded for BTC at Coinedup.com, previously mentioned as the source of the trade where Bitcoin was traded for Dogecoin at the rate of .5BTC for 1 Doge.

Momentum is also building on the Dogecoin subreddit, r/dogecoin, toward putting the cryptocurrency on Cryptsy.com, an exchange with many cryptocurrencies that is praised for its potential and lambasted for its often glitchy, coin-disappearing interface (but don’t worry, they will return your money).

As the above image mentions, Dogecoin is now the fourth most-mined Scrypt-based coin. In broken down terms, Dogecoin cannot be mined the same way as Bitcoin, using specialized equipment known as ASICs. Scrypt-based currencies like Dogecoin and Litecoin, can be mined using consumer hardware and this is enhanced by using ATI (and to some extent Nvidia) graphics cards. This has caused a shortage of the graphics cards. The significance here then is that Dogecoin is attracting the attention of both the general public, and mobilizing both rookies and power-users to engage in the technical task of mining, a true testament to the coin’s hotness and approachability. Wow. 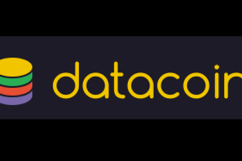 Datacoin, a Cryptocurrency That Lets You Store Your Data Everywhere