When he was at Stanford, Frank Reginald Brown had two close friends, and an idea for a photo-sharing app where the pictures disappeared.

Those two friends went on to found Snapchat.

Now, all Brown has is a mission: To receive his share of the company by any means necessary.

The LA Times offers a rundown of the story, according to Brown:

Brown claims he came up with the idea for Snapchat, then approached his friend Evan Spiegel, who supposedly called it a “million dollar idea.”

This would prove to be an understatement.

The two then looked for a third partner to code the app and settled on fellow Stanford undergrad Bobby Murphy. The three boys moved out to Siegel’s father’s house in Los Angeles County for the summer, where they hammered out final preparations for the app launch, and presumably had some pool parties.

Snapchat 1.0, then known as “Picaboo,” was launched in July 2011. The three decided to take a break, Murphy and Brown rejoining their families in Northern California and South Carolina, respectively.

Then that August, some long-distance falling out occurred between Brown and his boys. Brown claims Murphy and Spiegel changed the passwords on the Picaboo servers, locking Brown out, and completely cutting off communication with him.

The next month Snapchat went live.

2. His Former Partners Just Filed a Restraining Order Against Him

According to the Daily Mail, on December 10, 2013, Siegel and Murphy filed a restraining order, demanding Brown “cease and desist” from leaking lawsuit-related documents to the press.

The order was filed in the wake of an embarrassing video deposition, in which Evan Spiegel admitted that Brown “may deserve something” for his contributions to the app’s development:

The order claims that more leaks would cause “irreparable injury to Snapchat” and that the information contained in those documents already released is “highly confidential”.

“Mr Brown immediately signaled that he would ignore the order as he wages a public relations campaign to win the case.”

Back in November, Snapchat made waves by turning down a $3 billion buyout offer from Facebook.

IVP (Institutional Venture Partners) puts the present value of the company at $800 million. Back in June, Murphy and Spiegel reportedly pocketed a cool $10 million each off an $80 million funding drive.

Brown wants a full one-third ownership of the company, although previous reports suggested he’d be content with 20 percent. For the moment, he owns nothing.

via Via The Independent.

*That last part isn’t true. Or at least it’s unconfirmed.

Back in June, a text from Spiegel to Brown was leaked, in which Spiegel appears to credit Brown with the idea for “disappearing messages”:

Further evidence of Brown’s integral role in Snapchat’s early-going can be found in the signature of an email allegedly sent by Murphy, in June 2011:

Finally, a text message sent by Spiegel’s father to Brown’s mother appears to confirm that Brown did in fact work with Spiegel and Murphy throughout the summer of 2011:

The full text of Brown’s lawsuit can be viewed here: 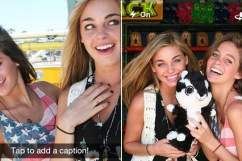