If there’s one valid complaint about Bitcoin, it’s that mining the cryptocurrency is a massive waste of electrical energy. Forbes says that it’s $15 million dollars worth a day.

With the odd exception of Primecoin, a cryptocurrency that’s mined by helping to find prime numbers, mining any crypto is wasting energy. This is one of the reasons Peercoin may be a promising alternative to Bitcoin, as put in our Bitcoin vs. Litecoin vs. Peercoin vs. Ripple vs. Namecoin comparison.

But Ripple Labs may have changed the game by changing the way that XRP (Ripple) is distributed. Ripple’s new take is the following:

At Ripple Labs, we believe in supporting projects that benefit humanity. As such, we’re giving away XRP in exchange for donating computing power to scientific research, via the World Community Grid. Anyone with an Internet-connected computer or Android device can participate.

They say that 18 million XRP has been given away in return for almost 6 million computing hours solving Bitcoin’s problem of wasting energy.

Creating XRP is now a beneficial computing process, where power is not wasted, precisely the opposite of Bitcoin.

Ripple Labs is working as part of a system called the “World Community Grid,” an effort to “create the world’s largest computing system using idle computers throughout the world to solve problems” relating to a variety of human problems including cancer, clean energy, and the flu.

Still, Ripple is not without its serious shortcomings.

For one, Ripple Labs has made some major gaffes in creating a viable alternative to Bitcoin. At first, Ripple’s aim was to freely give away XRP to gain popularity and hopefully, capitalization behind it. Fortunately, Ripple caught on that giving away their new currency for free would make investors queasy, and stopped the strategy, about midway through the year.

Further, cryptocurrency fanatics aren’t fans of Ripple. Unlike Bitcoin and most cryptocurrencies, it is distributed, not decentralized. Because of this, Ripple Labs ultimately controls XRP and can make determinations as it sees fit, and as a singular centralized entity. It can create Ripple out of thin air, if it so pleases.

One impassioned crypto-enthusiast insists that Ripple is a scam. These are the hurtles Ripple will ultimately face – at least, if it seeks to gain the approval of most Bitcoin users.

So, while Ripple may be the Bitcoin alternative silicon valley most approves of formally, having received some 6 million dollars in venture capital, it remains to be seen if what is truly a corpo-currency can stand against the anarchic, libertarian, and egalitarian principles – and fans – behind Bitcoin.

Ripple’s price has been consistent relative to Bitcoin. Since March of 2013, it has kept roughly a price of .0000231 BTC to .0000189 BTC today. Ripple’s price is volatile, but this means that at worse, Ripple is down 22% from Bitcoin since March, meaning its growth has been massive.

As it stands, Ripple is the second most capitalized currency at nearly 6 billion dollars. 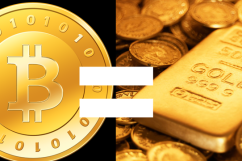