TechCrunch is reporting that Yahoo! is in “advanced” talks to acquire Tomfoolery, the makers of the Anchor app for Android and iOS. Anchor is an app that enables business communications and workflows. Here’s what we know so far about this developing story.

1. Tomfoolery Was Established in August of 2012

RT @mikeharvey: Yahoo Is Buying Tomfoolery "… http://t.co/2K6PlnSiZq < I thought this was a comment on its acquisition strategy. Then again…

//platform.twitter.com/widgets.js
Tomfoolery’s slogan is “Work Awesome,” which pretty much sums up the company’s attitude. Founded less than a year ago, Tomfoolery reportedly has $1.7 million in funding. Yahoo! may wrap up the Tomfoolery deal this week, so it’s clear this newcomer is doing something right. Tomfoolery’s biggest claim to fame is an app called Anchor.

Of special interest to corporate teams, Anchor fosters better communication among co-workers. Cool Anchor features include the ability to have a group chat centered around a file (ideal for having a team review a project in-progress), as well as the ability to create a full-featured Company Directory with one-touch access to employee contact info. Anchor syncs with Box, a file sharing/storage service that recently made Heavy’s list of Top 10 Best Business Apps for Android.

Anchor has a softer side as well. In addition to talking about work projects, the developers also encourage Anchor users to engage in social conversations with colleagues about lunch ideas, office parties, or carpool planning.

The team behind Anchor is a veritable “Who’s Who” of tech talent. Notable names include self-proclaimed “Boss Lady” Kakul Srivastava (seen in the video above), who helped create Yahoo! Mail. Other big names include Founder/Chief Product Officer Sol Lipman (an AOL vet) and Founder/VP of Platform Simon Batistoni (another former Yahoo! employee with a background in Search.)

Share this if you're excited about Yahoo!'s potential acquisition!

According to the Wall Street Journal, Yahoo! is willing to pay $16 million to acquire Tomfoolery. The deal has yet to be finalized, however, so that figure could change. To help put the potential Tomfoolery deal in perspective, the video above reveals that Yahoo! recently paid $50 million to acquire Aviate, a personal assistant and homescreen organization tool. TechCrunch reports that the Aviate sale may have been closer to $80 million.

4. Yahoo! Has a History of Shutting Down Acquisitions

Cult of Mac notes that Yahoo! has a history of acquiring app development teams, only for the apps to be shut down after the purchase goes through. It’s too soon to tell whether Yahoo! plans to shut down Anchor, or roll Tomfoolery’s offerings into a unique Yahoo-owned product.

App Advice relays a list of other Yahoo! acquisitions that were shelved shortly after being bought, including QuikIO, Summly, Astrid, and KitCam (mentioned in the tweet above.)

Since Marissa Mayer (seen in the video above) took over as CEO of Yahoo!, the tech giant has acquired two dozen companies. TechCrunch notes that two of those companies, Lexity and Rondee, are targeted towards business needs. Lexity is an e-commerce platform that was previously known as Vurve. Rondee was a conference call startup that was discontinued after the Yahoo! purchase. However, TechCrunch argues that the Rondee team might have been absorbed into Yahoo! Small Business or Messenger projects. The potential purchase of Tomfoolery might indicate that Yahoo!’s big picture strategy is to find a place in the infrastructure of businesses both big and small. 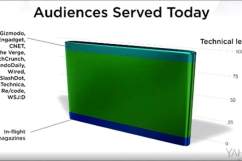