Reports have surfaced that cloud file sharing service Box has filed for an IPO. Box CEO Aaron Levie, pictured above, is keeping mum for now, but there are some facts that have emerged about this developing story.

Box has reportedly filed for an IPO in secret http://t.co/xRiAcIcaiH

Mashable reports that, like Twitter before it, Box has likely filed a “secret” IPO. What makes it secret? Business Insider explains that a secret, or confidential IPO, can only be used by a company earning less than $1 billion in revenue. Under this “secret” IPO, a company does not have to share their financials with the public until 21 days before it starts to court investors on its “roadshow.”

2. Box Could Go Public Before Dropbox

Quartz has indicated that Box could go public before their biggest rival, Dropbox. Box CEO Aaron Levie addresses rumors about going public in the Bloomberg video above.

The Wall Street Journal reports that Box is keeping quiet amidst all this speculation. A spokeswoman told reporters:

“We don’t have anything to share at this time. We’re focused on continuing to build our business and expand our customer relationships globally.”

4. Box Has Forbes’ Vote of Confidence

Enterprise software is a $300B market based on tools built for the industrial era. This number will be dwarfed in the information era.

Last month, Forbes ran an article entitled “Which Company Will Be Worth More In The End: Dropbox Or Box?” The article, written by former Box employee Alexandre Scialom, indicated that Box would outpace Dropbox. The reason? “Box is focused. Dropbox still needs to find itself.”

5. The Box IPO Will Likely Be Held in Q2

More on Box IPO: Box will go public likely in April, @Forbes has learned. Morgan Stanley is lead left for the filing. http://t.co/i4EMP2Zshu

According to the New York Times, the Box IPO will likely happen in the second quarter. 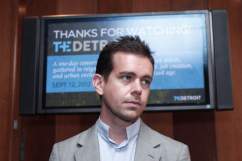 Read More
5 Fast Facts, Business, Internet, IPO
File sharing and cloud storage service Box has reportedly filed for an IPO. Here are the facts you should know about the next big tech IPO.