Multiple sources are reporting that the next Apple TV might be announced in April. Even more exciting: the Apple TV might contain Time Warner Cable content. Here’s what we know about these rumors so far.

Bloomberg reports that Time Warner Cable (along with “other potential partners”) are in talks to add video content to Apple’s next Apple TV offering. The report states:

“An agreement with Time Warner Cable would mark the first such deal with a cable or satellite company…For Time Warner Cable, the deal would advance its ‘TV Everywhere’ strategy, giving customers the ability to watch content on different devices. Its viewing app is already available on Apple’s iPad”

Bloomberg is also responsible for the video above, which suggests that consumers are more likely to see Apple “wearables” like the iWatch before they see the new Apple TV.

Business Insider notes that the new Apple TV might be announced as early as April, with the item actually arriving in stores in time for the holiday shopping season. No price has been announced. The current Apple TV retails for $99.

3. How Time Warner’s Content Will Be Integrated Is a Mystery

Here's What the New Apple TV Could Look Like (Hint: Check Your iPad) http://t.co/oEcopy49Vp via @pkafka

GigaOM notes that there is still a lot of mystery surrounding this supposed partnership between Apple and Time Warner. The tech blog went on to wonder exactly how Time Warner’s content would be displayed on the TV, writing:

“Would it be a standalone app on an over-the-top box that requires users to be current Time Warner subscribers, like the iOS app? Or would it be more along the lines of a standard cable box that you rent monthly from Time Warner and use to access your cable?”

UPDATE: The Wall Street Journal has some interesting information about how Time Warner content is likely to be deployed on the Apple TV. WSJ writes:

“Apple’s latest approach is far less ambitious. Instead of asking for full current seasons of shows, it is asking programmers for just the most recent five episodes of current-season shows—the standard for video-on-demand services in the TV industry, a person familiar with the matter said. Apple is also proposing to disable fast-forwarding on shows for three days after they air, which would protect TV channels.

It is unclear whether Apple would sell the box directly to customers, as it does with Apple TV, or reach a deal with a cable operator to distribute the box and lease it to customers.”

No news yet as to whether Comcast’s recent acquisition of Time Warner for $45 billion will impact the possible Apple TV deal.

4. The Deal Could Still Fall Apart

After having an iPhone I said this is great I wish it was bigger, then #apple released iPad now I wish #iOS was on my TV…enter #appletv.

In a report for TIME, Doug Aamoth argues that this Time Warner partnership with Apple may never actually come to pass. He writes:

“These deals go sour all the time. There’s a reason we’ve been writing about this mythical Apple TV set (not to be confused with the already-available Apple TV set-top box) and its requisite content deals since 2009.”

“There’s also a chance the new box will include a motion sensor that will let you control the Apple TV with gestures, sort of like the Kinect sensor on Microsoft’s Xbox One video game console.” 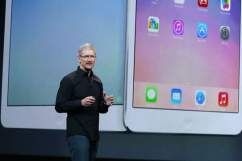