After Bitcoin exchange Mt. Gox decided to suspend withdrawals, Bitcoin’s value plummeted by 20 percent, according to CNBC. Here’s what you should know about this developing story.

UPDATE: Due to continued bugs at Mt. Gox, Bitcoin’s value has taken another hit. On February 10, The Next Web wrote: ” the virtual currency is now trading at around $570 on most exchanges and lost more than $43 in 30 minutes alone today.”

CNBC notes that Bitcoin was trading at $680.52 on the morning of February 7. That quite the change, given that Bitcoin had been traded around $850 for most of the week prior to the drop.

CoinDesk, which tracks the value of digital currencies, explains that the Bitcoin exchange known as Mt. Gox needed to temporarily suspend withdrawals in order to deal with an issue.

In a statement, Mt. Gox explained the situation, saying:

“In our efforts to resolve the issue being encountered by various bitcoin withdrawals, it was determined that the increase in the flow of withdrawal requests has hindered our efforts on a technical level. To understand the issue thoroughly, the system needs to be in a static state.

In order for our team to resolve the withdrawal issue it is necessary for a temporarily pause on all withdrawal requests to obtain a clear technical view of the current processes.”

In their report of the Bitcoin price drop, The Verge notes that “it’s still worrisome for Bitcoin owners that a single exchange’s maintenance can cause prices to plummet.”

Mt. Gox, once the most popular Bitcoin exchange, previously handled over 75 percent of Bitcoin trades. It’s no longer the largest exchange for Bitcoin, but recent events prove that the exchange is still quite influential in the cryptocurrency sphere.

The fluctuations in Bitcoin may shake confidence among retailers and service providers. As discussed in the radio interview above, some healthcare professionals are now accepting Bitcoin.

In addition to Mt. Gox’s decision to suspend withdrawals, another Bitcoin debacle has shaken consumer confidence this week. The Verge reports that users of the Bitcoin wallet service Coinbase have experience “a string of thefts.” This event could have contributed to the Bitcoin price drop.

On top of that, Apple pulled the popular Bitcoin wallet tool Blockchain from the App Store two days ago.

5. The Suspension Could Last Days

CNET reports that the Japanese-run Mt. Gox site will provide users with an update on the withdrawal suspension on Monday, February 10, 2014.

One Reddit user outlined their struggle to withdraw Bitcoin from Mt. Gox, referenced in the tweet above, which is well worth a read. This Redditor actually visited Mt. Gox offices to try and withdraw Bitcoin, but was unsuccessful.

“In conclusion, I think just witnessed MtGox die today. I didn’t get my bitcoin, but glad I came and tried,” the user wrote. 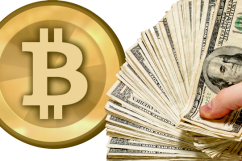