With the recent news that King will file an IPO, the makers of Candy Crush Saga are in the spotlight. One of the head honchos at King is Riccardo Zacconi, the company’s co-founder and CEO. Zacconi, pictured above, is likely to profit from the IPO. Here are some interesting facts about this Candy Crush bigwig.

1. Born in Italy, Works in London

Riccardo Zacconi was born in Italy in 1967. According to the Telegraph, he studied economics at LUISS University in Rome.

The Guardian adds, “Zacconi moved to London to work in technology in 2001, co-founding King, which is backed by Apax Partners and Index Ventures, two years later.”

Remember when King's Riccardo Zacconi said to email him about with questions about how they handle IP? We tried. http://t.co/4eDB8UUXx2

In an open letter on King.com, Zacconi was outspoken about the company’s controversial stance on intellectual property issues. In the wake of King’s decision to trademark the word “Candy,” as well as King’s desire to keep the word “Saga” from appearing in other mobile games, Zacconi wrote:

“King does not clone games, and we do not want anyone cloning our games.

Before we launch any game, we do a thorough search of other games in the marketplace and review relevant trademark filings to ensure that we are not infringing anyone else’s IP. We have launched hundreds of games. Occasionally, we get things wrong. When we do, we take appropriate action…

To protect our IP, last year we acquired the trademark in the EU for “Candy” from a company that was in bankruptcy – and we have filed for a similar trademark in the U.S. We’ve been the subject of no little scorn for our actions on this front, but the truth is that there is nothing very unusual about trademarking a common word for specific uses. Think of “Time”, “Money” “Fortune”, “Apple”, and “Sun”, to name a few. We are not trying to control the world’s use of the word “Candy;” having a trade mark doesn’t allow us to do that anyway. We’re just trying to prevent others from creating games that unfairly capitalise on our success.

Separately, we have opposed the game developer, Stoic’s application to trademark “Banner Saga.” We don’t believe that Banner Saga resembles any of our games but we already have a series of games where “Saga” is key to the brand which our players associate with King, such as Candy Crush Saga, Bubble Witch Saga, Pet Rescue Saga, Farm Heroes Saga and so on. All of these titles have already faced substantive trademark and copyright issues with clones.”

In a 2012 interview with Forbes, Zacconi had a lot to say about the role of tablets in the casual gaming industry. He talked in particular about the iPad Mini, saying:

“I am a super big fan if the iPad mini. It’s a fantastic device for gaming. It’s more portable than the iPad and allows you to have a much better surfing experience than the iPad. It integrates well and it’s a good answer from Apple to their competition. For our game world, it’s definitely very positive because from a development effort point of view the games can be immediately played on the iPad mini. It doesn’t need any additional work.”

4. Riccardo Zacconi’s Net Worth Is Unknown

Zacconi appears to have done a good job of keeping his net worth “hush-hush.” While there are no reliable figures out there for the size of this gaming industry titan’s personal fortune, the Wall Street Journal notes that Zacconi only owns 10% of King.

Apax Partners, a European private-equity firm, owns about half the company, with another 8% being held by the venture capital firm Index Ventures.

Still, even owning just 10% of a company that’s poised to make a $500 million IPO is likely to put Zacconi on solid financial footing.

#CandyCrush maker announced US IPO today – look out for interview with CEO Zacconi in next edition of Wired, out Mar 6.

At 46, Zacconi has held a lot of other jobs before his stint as the big cheese at King. Zacconi has a broad range of tech-world experience, which has informed his work at King. According to The Local, Zacconi “has led an international career, including playing marketing cupid for online dating site Match.com and working for Swedish internet company, Spray Network.” 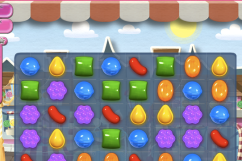