The ‘Steve Jobs Time Capsule’, coined for the donation Jobs made into the tube back in the 80’s, is being excavated in tonight’s episode of “Diggers” on National Geographic. Here are five fast facts you should know about the history and what to expect in the capsule.

1. The Time Capsule’s Contents Were Collected in 1983

During the 1983 Design Conference in Aspen, CO, Jobs gave a presentation that many say laid out the future of the iPad and iPhone. The attendees of the conference donated a number of gifts into the time capsule, such as all their ID badges, a six-pack of Balentine Beer, some notebooks and the most famous of all, Jobs’ Lisa mouse. From then on, the capsule was changed from the Aspen Time Tube to the Steve Jobs Time Capsule, according to PowerPage You can listen to his whole speech below:

In 2000 when they wanted to excavate for the time capsule, no one had known where it was buried because of a change in land ownership and improvements made in the area. Also, details on where the capsule was buried were never documented, according to the Aspen Times.

3. The Lisa Was Apple’s First Computer with a Mouse

Designed in the early 1980’s, Lisa was Apple’s first personalized computer. But it wasn’t until the Lisa 2 in 1984 did the Lisa mouse get introduced to the computer. The Lisa Mouse used a steel ball opposed to modern rubber balls and remained Apple’s constant for a one-click mouse for over 20 years.

As an homage to Jobs, who would’ve been 59 yesterday, “Diggers” is launching their season premiere with the unveiling of the Steve Jobs Time Capsule. Jobs died on Oct. 5 2011 of pancreatic cancer.

5. “Diggers” Will Air the Unveiling Tonight

The season premiere of “Diggers” will be on tonight, Feb. 25 at 10 p.m. on National Geographic. 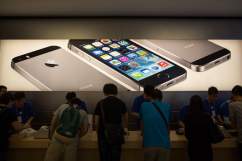