Facebook is going to buy WhatsApp for a whopping $16 billion. Here’s what you should know about this big tech deal.

It’s no wonder Facebook wanted to buy WhatsApp. In recent months, the media has been saying that Facebook was in danger of becoming irrelevant in the face of services like WhatsApp. For example, Forbes recently ran an article with the headline “Watch Out, Facebook: WhatsApp Climbs Past 400 Million Active Users,” while the Independent recently ran with “Facebook ‘dead and buried’ as teens switch to Snapchat and Whatsapp.”

Rumors about Facebook buying WhatsApp have been swirling since last year, as you can see from the Bloomberg video above.

3. The WhatsApp Deal Is Deceptively Big

You might think that $16 billion is a lot of money to pay for one company…and Facebook would agree with you. The fact of the matter is that Facebook will actually only pay $4 billion in cash to acquire WhatsApp. The official Facebook Newsroom release notes that the remaining portion of the deal will be paid for with $12 billion worth of Facebook shares.

“The agreement also provides for an additional $3 billion in restricted stock units to be granted to WhatsApp’s founders and employees that will vest over four years subsequent to closing.”

Business Insider notes that WhatsApp, which is basically a replacement text messaging platform, has a considerable user base. The report notes:

The app is free to install, and then users pay $.99 every year.”

It’s not clear hows much of WhatsApp’s user base already overlaps with Facebook, which has 1.2 billion monthly active users, according to Pew Research.

But given the minor hit to Facebook’s stock price referenced in the tweet above, some tech insiders are wondering if Facebook may have paid too much.

Let's keep things in perspective. What's really important is how Aaron Sorkin will report on WhatsApp two years from now.

“Here’s what will change for you, our users: nothing.

WhatsApp will remain autonomous and operate independently. You can continue to enjoy the service for a nominal fee. You can continue to use WhatsApp no matter where in the world you are, or what smartphone you’re using. And you can still count on absolutely no ads interrupting your communication. There would have been no partnership between our two companies if we had to compromise on the core principles that will always define our company, our vision and our product.” 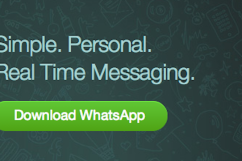