The Fitbit Force has been recalled due to skin rash issues. Here’s everything you need to know about the recall and how to participate.

1. The Fitbit Force Model Has Been Recalled

The recall focuses only on one Fitbit model, the Fitbit Force. Fitbit’s CEO took to the company blog to explain the situation. The CEO writes:

“We have stopped selling Force and have decided to conduct a voluntary recall. We are offering a refund directly to consumers for full retail price. For additional information related to the recall, we have set up a dedicated page on our website and a call center at 888-656-6381.”

The dedicated site can be reached here, where you may request a Fitbit Force return kit. Only the Force model is eligible for the recall at this time. The recall was voluntary.

The Fitbit site notes that “a reimbursement check will be issued and sent directly to you within 2-6 weeks after receipt of the affected product.”

The recall of the Fitbit Force is somewhat surprising, given that the company has already been offering replacements for about a month. According to an article on The Verge last month:

“Fitbit has reacted quickly to the complaints, offering any customers that “feel that they have an allergy related to their Fitbit device” a refund, or a replacement device from any of its tracker ranges. Fitbit says it will handle all shipping costs and provide a refund for any difference in price.”

3. Under 2 Percent of Fitbit Users Complained About Skin Rashes

Fitbit to recall Force wristband due to 'skin irritation' http://t.co/l4eWsWeBVj via @USATODAY NO problem with my Force! Love it.

The company says that just 1.7 percent of Fitbit Force users complained about skin irritation. The skin rash most affected users experienced was contact dermatitis, which was likely caused by Fitbit owners wearing the device 24 hours a day for extended periods of time.

The Huffington Post reports that the Fitbit Force has only been on sale for about four months. This recall is likely to upset some Fitbit fans, but the company’s proactive stance may minimize any backlash.

5. The Recall Could Impact Future Products

Ha! Everyone said "get the fitbit force" and I ended up with the Jawbone Up. Now there's a recall on the fitbits.

Wearable fitness bands are a growing segment of the tech industry, and this recall is likely to make other manufacturers re-think their plans. Other companies, such as Samsung and HTC are expected to debut fitness bands of their own at MWC 2014. These companies, as well as Fitbit, will need to figure out a way to prevent similar skin problems from affecting users in the future. Otherwise, recall programs for fitness bands could become all too routine. 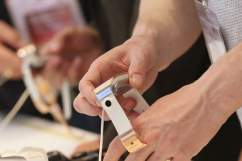