Google has released an etiquette guide for using Google Glass. If you don’t want to be a “Glasshole,” you’d better read this.

The video above talks about a guy that got questioned by the Feds after wearing Google Glass in a movie theatre. The guy didn’t actually do anything wrong, but perhaps he wasn’t using his best judgement.

The etiquette guide from Google has a list of Do’s and a list of Don’ts, and one of the most important Do’s is all about asking for permission. The guide states:

“Standing alone in the corner of a room staring at people while recording them through Glass is not going to win you any friends…The Glass camera function is no different from a cell phone so behave as you would with your phone and ask permission before taking photos or videos of others.”

In a move that’s probably just as good for Google’s image as it is for the consumer, Google advises Glass users to simply not be rude while wearing the product. Calling out such creepy users as a “Glasshole,” Google adds that Google Glass is meant to be a fun device, not a tool for invading privacy.

“Respect others and if they have questions about Glass don’t get snappy. Be polite and explain what Glass does and remember, a quick demo can go a long way. In places where cell phone cameras aren’t allowed, the same rules will apply to Glass. If you’re asked to turn your phone off, turn Glass off as well. Breaking the rules or being rude will not get businesses excited about Glass and will ruin it for other Explorers.”

What Google means by “glassing out” is staring into the device for an extended period of time. As the Google etiquette guide explains:

“Glass was built for short bursts of information and interactions that allow you to quickly get back to doing the other things you love. If you find yourself staring off into the prism for long periods of time you’re probably looking pretty weird to the people around you. So don’t read War and Peace on Glass.”

Not only will staring at Google Glass for a long period of time cause eye strain, but it may distance you from the people around you. Plus, you could get distracted by the screen and get hurt…we’ve all seen people texting on cell phones walk into street signs and lampposts.

4. Be a Brand Ambassador

If you have to tell people how to behave with Google Glass they probably didn't know how to behave to begin with http://t.co/ait1yhJh6T @INQ

Alright, that’s not literally what Google says in their guide, but they do ask that people wearing glass be willing to entertain random questions from strangers about the technology strapped to their head. You can’t really wear that kind of headgear and expect the average person not to stare at you or ask questions.

5. Google Appears to Have a Sense of Humor

Some of Google’s points about proper Google Glass manners are rather funny. The guide warns users not to use Glass while playing high-impact sports (“Water skiing, bull riding or cage fighting with Glass are probably not good ideas.”), as well as tips about goings hands free (like when you’re “juggling flaming torches while balancing on a beach ball.”)

The bottom line here is that Google is using this etiquette guide to educate their users on proper behavior. This effort may go a long way to dispelling the notion that the people wearing these $1,500 futuristic devices are snobbish, creepy, or just plain out of touch.

The Bloomberg video above talks about the “digital divide” created by Google Glass. Perhaps this humorous etiquette guide can dispel some people’s negative feelings towards Glass. 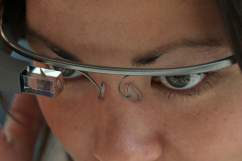