One of the coolest devices to come out of MWC 2014 is a “hybrid smartwatch” from Huawei called the Talkband B1. Here’s everything you need to know about this must-have gadget.

The Talkband has the same sleek profile of a Fitbit or Jawbone fitness tracker, but it also lets you make phone calls on the go, thanks to a Bluetooth earpiece. The earpiece pops out of the wristband housing, allowing you to place it in your ear during a call.

The fitness band that doubles up as a PHONE – and it even lets you make calls in the shower: The TalkBand 1 co… http://t.co/WbiQqFKr7W

Sorry, swimmers, this isn’t a pool-friendly gadget. While it isn’t waterproof, it is water resistant. You can splash it with water or briefly submerge it in shallow water without doing any damage. You can wear this device in the shower.

CNET reports that the Talkband device holds a charge fairly well. The Talkband reportedly “has 7 hours of talk time and 2 weeks of standby capability.”

POPULAR: Huawei TalkBand B1 is a fitness and sleep tracker with a Bluetooth 4.1 … http://t.co/xYdSWSqyfh pic.twitter.com/ZcPDIa0TqH

CNET spent some hands-on time with this gadget. They report:

“…the functionality is very limited. Right now it tracks your steps, calories burned, how well you’ve slept, and of course lets you make phone calls. The 1.4-inch OLED display is black and white, similar to what we’ve seen on other fitness-oriented wearables, and it does make for a reasonably nice-looking Bluetooth headset when removed from the strap.”

BGR has the scoop on the device’s release date:

“The TalkBand B1 will launch in China this March, and in Japan, Middle East, Russia and Western Europe starting with the second quarter of the year.”

It is unclear if or when the device will make it to American consumers. 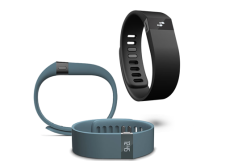