Rumors of Apple’s newest iOS8 development includes the release and design of a Healthbook app, which tracks users’ motions, heart rate and blood pressure. The team of medical experts Apple has acquired in the past month also gives creedence to the idea that Apple’s newest conquest will be mobile health (mHealth) technology. Here are five facts about the latest in the iOS8 development.

Members of Apple and the FDA’s mobile tech leaders met on December 13 to discuss health tech on wearable devices. (FDA)

Apple had their eyes set on mobile fitness application since last December when they met with the FDA to discuss mobile fitness applications. Apple leaders such as Jeff Williams, senior vice president of Operations and Bud Tribble, vice president of software technology at Apple, met with FDA members like Dr. Jeffrey Shuren, director of the Center for Devices and Radiological Health.

“We are so interested to see two of the most dominant companies in the tech space – Google and Apple – recently engaging FDA on mHealth [mobile health] issues,” wrote Mark Mcandrew, a lawyer representing medical tech companies, in his blog.

Masimo Corp. is one of the world’s leaders in mHealth, and Apple has hired their former Chief Medical Officer, Dr. Michael O’Reilly. (Masimo)

Apple picked up Dr. Michael O’Reilly, former Chief Medical Officer of Masimo Corporation, one of the world’s leaders in medical equipment, which sparked the initial web reaction that Apple developers had wearable medical devices in mind for the much anticipated, though highly secret, iWatch.

O’Reilly’s background in non-invasive vital checking systems would prove to be Apple’s newest goal. However, the question remians what the newest Apple device will do that hasn’t already been done by Fitbit or Nike, which have already used heart rate monitors in their products.

At Apple’s unveiling of the iPhone5s, they mentioned the phone’s M7 chip which is a motion processor that “gathers data from the accelerometer, gyroscope and compass,” reported 9to5mac.com. “The M7 motion coprocessor continuously measures your motion data, even when the device is asleep, and saves battery life for pedometer or other fitness apps that use the accelerometer all day.”

The interface for Healthbook is rumored to be similar to the current iOS Passbook app, which stores loyalty cards, tickets and coupons. “The new health and fitness application’s interface is a stack of cards that can be easily swiped between,” reported 9to5mac.com.

Passbook’s success is still being debated, primarily because it’s use was limited and deemed a failure by many blogegrs, so it’s questionable how Apple’s design team will make Healthbook more functional and easy to use.

Save The Date? New iPhone (6?) May Be Unveiled September 10

The mHealth field for health and fitness devices is not something new, and Firbit, Jawbone and Nike have all been using mobile for their devices for well over a few years. But Apple’s Healthbook might be the first to be able to combine all of those into one device, rendering the competition useless for iWatch owners. However, it’s unclear if the iPhone6 will be able to track as effectively as the iWatch.

iOS8 is being rumored to release later this year, and the newewst in design may include a Healthbook app which rivals competitors like Fitbit and Nike. Above is artist Vilim Plužarić’s illustration.

The abstract of the patent also mentioned the construction of the vitals sensors and “to ensure that the pads are not visibly or haptically distinguishable on the device, thus improving the aesthetic qualities of the device,” it said. 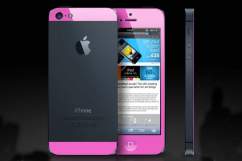